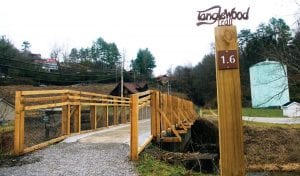 THE LAST BRIDGE on the Tanglewood Trail crosses the Kentucky River at the Upper Bottom and then stops. The Letcher County Tourism Commission hopes to extend the trail in 2020, and take it through the old L&N Railroad Tunnel at Tunnel Hill, seen in the background here. (Photo by Sam Adams)

Look for an extension of the Whitesburg walking trail to include an old railroad tunnel and a riverside/ forest trail in the coming year.

Work has already begun on upgrading bridge railing on parts of the trail along the former railroad bed, and parts of the new trail are being built.

The project is one of several underway by the Letcher County Tourism Commission in an attempt to draw more people in the county, and make tourists’ stays here more enjoyable, Commission Chairwoman Missy Matthews said.

“We’re burning the candle at both ends,” she said.

The commission has ordered a “vault toilet” to be placed at the Little Shepherd Trail overlook on US 119 South, applied for a $200,000 grant to improve Fishpond Lake, is still looking for ways to begin work on a connector trail between the Pine Mountain Trail and Whitesburg, and is doing planning work for the proposed Thunder Mountain Sport Shooting Resort at Marlowe.

The most visible projects this year will be the trail extension and work on the Little Shepherd Trail overlook area.

“We anticipate that being the trailhead for the downhill trail,” Matthews said.

The downhill trail will be a mountain biking trail that will follow a 19th century road bed from the top of Pine Mountain at least part of the way down the hill. The vault toilet at the trailhead will make the area more of a rest area than it is now. There is no public water or sewer at the top of the mountain, so the specialized bathroom is needed. For now it will be a unisex facility, but a second one will be installed later.

Vault toilets are often found in state and national parks, particularly in areas where there is no water. The units are similar to traditional pit toilets, but the waste in a vault toilet is contained in a sealed vault that is engineered to reduce odors to a minimum. It uses no water or electricity. It has to be pumped every so often to keep it clean.

The other trail work is inside the city limits of Whitesburg. One of the bridges has been completed, but others are still being worked on. The trail now ends at the railroad bridge on the east end of the Upper Bottom. The new trail is to pick up there, and pass through the old railroad tunnel on the opposite side of Kansas Avenue.

When the trail leaves the tunnel, it will turn right and follow the North Fork of the Kentucky River around the Appalachian Regional Hospital property on the opposite side of the river from Letcher Manor Nursing Home, connect with Childers Oil property near the bypass, and continue following the river until it arrives at the city’s Riverside Park.

Matthews said the end of the trail past the tunnel has a completely different character than the rest.

“It doesn’t even look like you’re in the city,” she said.

Matthews said falling population here has made it difficult to judge whether tourism is increasing in the county, but she hopes it will be clearer once the commission gets a year’s worth of figures from the county transient room tax.

“Anything I would say right now would just be a guess,” she said.