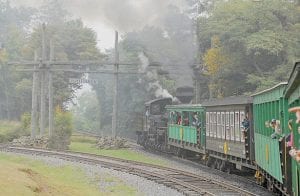 A passenger train from the Cass Scenic Railroad pulled into the Whittaker station on Sept. 14. The railroad draws 40,000-70,000 tourists between May and October, opting for the five-hour journey to Bald Knob, West Virginia’s third-highest peak. (AP Photo/Jeff Gentner)

Moments after it pulls out of the station, chugging into the dense cover of the Monongahela National Forest, the Shay locomotive begins its climb.

The baking sun vanishes, the temperature drops and riders grow captivated by wildflowers, butterflies and a fearless fawn that stands on the track, staring until the last possible moment before scampering off.

When the whistle blows, white steam shoots skyward. And from time to time, a cloud of acrid black smoke wafts over the cars, the necessary result of burning 4-1/2 tons of coal for fuel. It stings the throat, but for John Grencik, it only adds to the authenticity of the Cass Scenic Railroad.

“I love coal smoke. I get it natural,” says Grencik, a model train builder and the descendant of railroad workers on both sides of his family.

Grencik, 76, traveled from Bakersfield, Calif., to ride a railroad that draws 40,000 to 70,000 tourists between May and October, opting for the five-hour journey to Bald Knob, West Virginia’s third-highest peak. 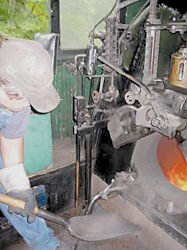 The personal attention of the crew, including an invitation to visit the maintenance shop, made the experience better than he’d hoped.

“If you want to see the scenery and see nature as it is – and you don’t want to do it fast – I’d give ’em four stars,” Grencik says. “It’s gorgeous. You picture yourself 40 or 50 years ago, the way things used to be.”

Cass Scenic Railroad is a unique state park, 11 miles long and just 50 feet wide. At 7 mph, the ride is slow but steady. For every 100 feet the train rolls forward, it rises 9 feet. As it does, a spectacular panorama unfolds, with vistas across the Alleghenies, deep into Virginia.

“The views are breathtaking,” says Dot Frank of Woodsfield, Ohio.

As she and other tourists gape and snap photos, conductor Bob Starke chuckles.

“I hear it every day, ‘I had no idea we had this right here in West Virginia!”‘

But West Virginia, with an abundance of log-, poultry- and coal-hauling routes, is an ideal place for railroad tourism. There are five scenic railroads, one offering three trains and routes. 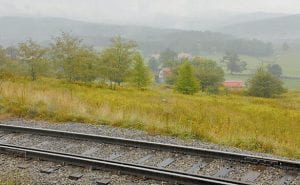 Though Cass is popular all summer, crowds grow in the fall when the mountains turn gold, orange and red. Starke’s crew runs five cars with 130 people on a typical summer day, and nine cars with 500 people in October.

Chris Guenzler, who has ridden more than 1 million miles of rail since 1980, says there are more than 200 tourist trains nationwide, and “West Virginia has some of the best … probably the most scenic.”

Guenzler, of Santa Ana, Calif., ranks Cass among his favorites, along with the Cumbres & Toltec Scenic Railroad in New Mexico and Colorado and the Durango & Silverton Narrow Gauge Railroad in Colorado.

New routes open almost every year, but Guenzler says there are challenges to staying in business. Key among them is the cost of liability insurance, which skyrocketed after accidents such as the 1995 explosion of a steam engine on the Gettysburg Railroad in Pennsylvania.

That means operators must reduce costs, in some cases by relying heavily on volunteer crews. They also must market their routes creatively and attract repeat riders, he says. Cass, for example, offers an evening dinner and music excursion called Fiddles and Vittles along with daytime runs.

“Some do Christmas themes, like the Polar Express,” Guenzler says. “The thing that draws kids – although most of us can’t tand him – is Thomas the Tank Engine.”

“You’d be surprised how many people want to see an eagle,” says train owner Dave Corbitt. “These are wild birds flying around, and you can’t really count on them, but luckily, we almost always see one.”

The Potomac Eagle follows the South Branch of the Potomac River into a narrow valley called The Trough, accessible only by boat or train.

“Canoeing is great,” Corbitt says, “but it’s not for everyone.”

Trains, on the other hand, cater to everyone from parents with small children to less agile senior citizens.

The Flyer has two routes, one covering 46 miles over four hours, from Elkins to a roaring 18-foot-high waterfall on Shaver’s Fork of the Cheat River. A 78-mile, seven-hour tour runs on Sundays out of Belington.

The enclosed air-conditioned cars travel about 25 mph alongside a boulder-strewn river to the High Falls of the Cheat, crossing a bridge barely wider than the train, rumbling through an 1,800- foot tunnel and passing an abandoned rail bridge to nowhere.

Sometimes, riders get off at Woodrow and walk back to Elkins, fishing 5 miles of river. Other riders reach the falls – where the 35-degree curve is too sharp for the Flyer – and board the motor-driven Cheat Mountain Salamander, a “rail bus” without a locomotive, for a second journey.

Engineer Bob Robinson of Parkersburg says the operation couldn’t survive if it had to pay $70,000 salaries, so most of the crew donate their skills.

“I treat this as a way to volunteer and allow Grandpa to take the kids out for a train ride,” he says. “Some people go out and build houses and do other things. This is my way.”

Bernadette and David Wilson of North Weymouth, Mass., discovered the Flyer when a timeshare swap landed them in nearby Canaan Valley. With David recovering from leg surgery, it seemed an ideal adventure.

“This is a slow, slow train,” Bernadette says. “Some people don’t like that. You have to want to have a relaxing trip and take your time.”

But Howard Payne, the Flyer’s announcer, says that’s just what folks are starting to do – slow down.

Steam-powered excursions using Shay locomotives run on a former logging railroad from May through October. An 11- mile trip to Bald Knob, the third highest point in West Virginia at 4,842 feet, takes five hours round trip. Another trip travels to Spruce, a former logging town atop Cheat Mountain, and passes through Big Cut, the highest point on a standard gauge mainline railway in the East.

The railroad also rents 13 original, refurbished “company” houses in the historic town of Cass, as well as a wilderness cabin in the Monongahela National Forest. Riders can even spend the night in one of three cabooses equipped with a coal stove and sink. The cabooses are hauled to the top of Cheat Mountain and unhooked. The locomotive returns in the morning for the ride back to Cass.

Restaurants are miles away, but there’s good food within driving distance. Meck’s Bakery, a Mennonite kitchen famous for sweet rolls and fruit pies, is on state Route 66 east of Cass, about a mile from the Route 28/92 intersection. The train-themed Boyer Station, four miles south of Bartow on Routes 28/92, features homemade lasagna and a “flat car” steak hoagie with chili and fixings.

Amtrak and the Collis P. Huntington Railroad Historical Society operate daylong fall foliage trips through the New River Gorge in October. The train follows the Kanawha River to the mouth of the New River at Gauley Bridge, then follows the New to Hinton. Sights along the way include downtown Charleston and the state Capitol, Kanawha Falls, Hawk’s Nest dam and bridge, the New River Gorge Bridge and Sandstone Falls. Other excursions include trips to The Greenbrier, Lewisburg and Pence Springs. Call 606-325-8800 or go to http:/ /www.newrivertrain.com/