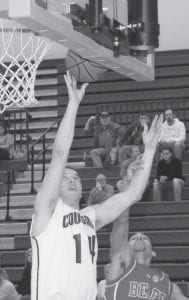 After finishing the regular season with a record of 19-7, the Letcher County Central Cougars must really get serious as the district tournament in now underway at Knott County Central. The Patriots are the number one seed going in and they are very hard to beat on their own floor. They are 8-0 in district play. The Cougars are the number two seed at 6-2 with their only district losses coming to the Patriots.

The Cougars are led by Josh Profitt and Charlie Banks, who enter the tournament averaging 14 points each. Devon Blair comes in at 10 points a game and Cole Cornett is right there with 9.1 points a game. They shoot the trey well and Josh Profitt is one of the state’s best. He has hit 89-176 for a remarkable 50 percent. Charlie Banks leads the Cougars on the boards with 7.6 a game.

The Cougars were to play the Crusaders of June Buchanan on Tuesday night in their first game. The tournament actually started on Monday as Jenkins took on Cordia with the winner playing the Patriots in round 2.

The Cougars have beaten the Crusaders twice this year but it is always hard to beat a team three times. The Crusaders are a solid 18-9 team and they still have one of the Stepp brothers and big man Garrison Collins in the middle. These kids have been under pressure and they have played under the big lights.

Everybody plays better this time of year and it is 53rd District tournament time. There are six teams in the region that have won at least 18 games. Hazard is 22-7, Perry Central is 21-5, Knott County is 21-7, dark horse Buckhorn is 20-8, the Cougars are 19- 7 and June Buchanan is 18- 9. The region looks like a tossup. Any of these teams can win it all. Hazard is the favorite but the Patriots have beaten them twice. Perry Central has beaten everybody at least once and the Letcher Central Cougars, June Buchanan Crusaders and Buckhorn Wildcats are each capable of pulling off the upset if they are lucky enough to make it to the region.

This is the best time of year.

The Cougars played twice last week. They hosted the Belfry Pirates February 17 and traveled to Pike Central to play a doubleheader with the girls on Friday night.

February 17 was Senior Night, and that is always an emotional time for the seniors as well as parents and fans and it is always a game that usually brings out the best in the players (especially the seniors). On this night the 8-14 Belfry Pirates would be the victim.

The Cougars (17-7) were coming off of two straight losses and were in no mood to play around. They jumped on the helpless Pirates quickly with treys coming from Devon Blair and Josh Profitt as the guard combo lit it up from downtown. The Cougars led 40- 23 at the break and went on to roll 77-51.

The Cougars improved to 18-7 on the season. They shot almost 50 percent on the night as they hit 29-59 from the field, and hit 8-21 treys and 11-16 from the charity stripe. They pulled down 37 rebounds and were led by the seniors.

On Friday night, the Cougars traveled to Pike Central in another big tuneup game before the district tournament starts. The Cougars were in for a battle early on as they led 18-16 after one and 35-27 at the break, but they kicked it up a notch as they always do in the third quarter and roared out to lead 58-35 after three quarters.

The Cougars were led by sharpshooter Josh Profitt with 21 points, who hit 6-10 treys. Charlie Banks hit for 16 points and 7 rebounds. Freshman Logan Johnson had a big game with 14 points and 8 rebounds. Cole Cornett was the fourth Cougar in double figures as he tossed in 10. Eric Ison had another good game from his center position with 7 points and 10 rebounds and 4 blocks. Devon Blair hit for 4 points and had 6 assists. James Gose rounded out the scoring with 2.