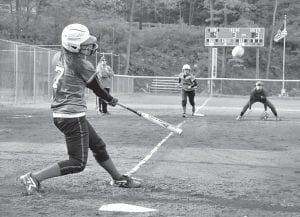 The Jenkins Lady Cavaliers traveled to Owensboro on Saturday to play in the All “A” Classic state tournament.

Caitlynn Estevez took the mound for Jenkins. In the first inning of the April 25 game, Jenkins committed four errors on the first five batters, and gave up two runs. In the bottom half, East Ridge returned the favor as Melissa Bartley and Charity Niece reached base on singles, moved around on an error, and both scored on passed balls, giving Jenkins the two runs back.

In the second, Alicia Bentley singled for East Ridge, stole second, moved to third on a fielder’s choice, and scored on a passed ball. In the bottom half, Ashley Wright reached base on a fielder’s choice and Kayla Stambaugh drove in Wright with a double to left center to tie the game 3-3.

In the fourth, Christian Yates singled for the Lady Warriors and stole second, Tori Adkins singled in Yates to take a 4-3 lead after four.

In the seventh inning, Melissa Bartley and Charity Niece both reached base on errors. East Ridge got the next two batters out, moving the runners over. Jenkins was down to its last out with Ashley Niece up to bat. With a full count, the pitcher threw a wild change up to score Bartley and walk Ashley Niece, as well as Charity Niece moving to third. Brittany Mullins hit a line drive to right field to score Charity Niece with the winning run.

Jenkins pulled out a 5-4 victory to pick up its 20th win. Estevez picked up the 5-4 win, giving up four hits with four strikeouts.

On April 23, Letcher County Central traveled to Jenkins to face off with the 18-4 Lady Cavaliers.

LCC scored first on a single by Bradlyn Polis, who stole second, then moved to third on a fielder’s choice and scored on a passed ball. In the bottom of the first, Kayla Stambaugh received a lead off walk, and Melissa Bartley singled. Stambaugh stole third and Bartley stole second. Randee Phillips doubled to center to score both runners.

In the second inning, Cheyenne Stidham doubled and stole third and scored on an error.

In the third, Carli Combs doubled for LCC and got to third on a passed ball and scored on an error. In the bottom of the third, Randee Phillips singled and Ashley Niece received a walk. Both then moved around and scored on passed balls. Charity Niece reached base on an LCC error, Ally De- Priest received a walk and Ashley Wright singled to load the bases. Kayla Stambaugh hit a double off the top of the centerfield fence to clear the bases. Melissa Bartley singled in Stambaugh to take an 8-3 lead after three innings.

In the fifth inning, Stidham reached base on a walk and scored on a throwing error.

In the bottom of the sixth, Mercedes Boggs and Randee Phillips both reached base on a single, and Boggs stole third and scored on an error. Phillips moved around and scored on a passed ball.

In the bottom of the seventh with Jenkins up 10- 4, Stidham singled, stole second and scored on a Polis single. Kaitlynn Creech reached base on a throwing error, and Polis tried to take third but was thrown out by Caitlynn Estevez. Shanna Coots doubled, scoring Creech, and Coots moved to third on an error. Carli Combs received a walk and Coots scored on a fielder’s choice. Emily Johnson reached base on a fielding error and Combs scored. With the tying run at the plate, Stambaugh struck out Annie Boggs for the Cavalier win.