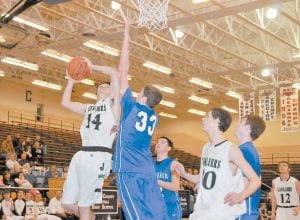 Jenkins forward Koty Sexton went up for a shot in the Cavaliers’ 62-52 win over June Buchanan in the opening round of the 53rd District Tournament at Knott County Central on Monday. Sexton led all scorers in the game, dropping in 23 points in the winning effort. (Photo by Chris Anderson)

The boys’ championship game will be held at 7 p.m. on Friday while the girls’ title game will tip off at 7:30 p.m. on Saturday.

With only one starter returning this year, the LCC boys surprised many by posting a 16-11 record. In recognition of the success of this season’s team, the Kentucky Association of Basketball Coaches (KABC) honored Cougar coach Robert Hammonds with the 14th Region Coach of the Year award. 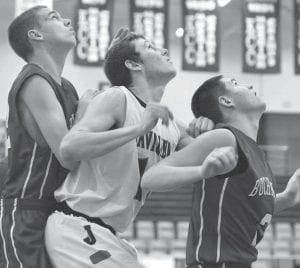 Koty Sexton is squeezed by two June Buchanan players as the three prepare to fight for a rebound during the Jenkins Cavaliers’ win over the Crusaders in the 53rd District opener Monday. (Photo by Brandon Meyer/B. Meyer Images)

Two LCC basketball players, seniors Cody Gregory and Kelah Eldridge, were named the KABC boys’ and girls’ 14th Region Players of the Year, respectively. Both players are now eligible to try out for the Kentucky All-Star squads that will compete against the In diana boys’ and girls’ All-Stars in this summer’s annual Kentucky Indiana All-Star Classic.

The visiting Lady Cougars closed out their regular season Feb. 8 with a convincing win over the Lady Bobcats. With the victory, LCCHS finished its season with a remarkable 24-5 record — including winning its final 12 regular season games — and the top ranking in the 14th Region heading into the district tournament next week.

The Lady Cougars, who defeated Breathitt County 70-46 just over a month ago, lost little time in taking control of this second matchup. Led by the early scoring of Kelah Eldridge and sophomore guard Cheyanne Stidham, LCCHS ran out to a 21-12 advantage by the end of the opening quarter. With seniors Vannah Breeding and Julie Cornett getting in on the fireworks, the Lady Cougars never let up, building their margin to 46-22 by the half.