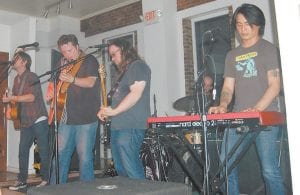 Letcher County has become a dream for lovers of live music, a fact that became even more clear over the past weekend as two national touring acts performed here. On Friday, Jason Isbell and the 400 Unit of Muscle Shoals, Alabama, performed at Summit City in Whitesburg, while rising country music star Justin Moore of Poyen, Arkansas performed a benefit at Jenkins High School on Saturday. Pictured above, guitarist Browan Lollar sings a tune popularized in the late 1970’s by Talking Heads, “Psycho Killer,” while being supported by fellow musicians Isbell (second from left), Jimbo Hart and Derry DeBorja. In the photo below, Moore performs with his band in the Jenkins High School gymnasium. (Photos by Chris Anderson and Sally Barto) 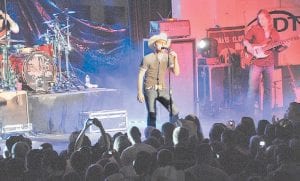