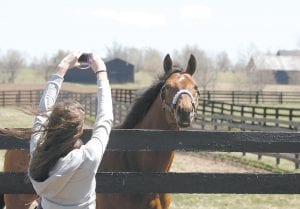 Jennifer Riggle of Huntington, Ind., raised her camera last week to photograph Big Brown in a paddock at the Three Chimneys Farm in Midway, Ky. Sleek thoroughbreds are the stars in Kentucky’s bluegrass region, and there’s no better time to visit than spring. (AP Photo/Ed Reinke)

As star-struck visitors approached a lush green paddock at Three Chimneys Farm, the stately thoroughbred Big Brown was right on cue. The Kentucky Derby and Preakness winner ambled up to the plank fence and calmly posed like a movie star on the red carpet.

Jennifer Riggle stretched her arm, camera in hand, and clicked photos of the celebrity horse. Riggle, a high school senior from Huntington, Ind., spent spring break in Kentucky horse country with her mother and a teenage friend.

They toured several horse farms, strolled around the Kentucky Horse Park and took in a day of racing at venerable Keeneland race track in nearby Lexington. Riggle, 18, said it was better than hanging out on a beach.

“Getting a tan would be nice,” she said. “But this is so much better. It’s like going to Hollywood and seeing celebrities. I saw a horse that’s worth how many millions of dollars?”

Sleek thoroughbreds are the stars in Kentucky’s bluegrass region, and there’s no better time to visit than spring, in the weeks before and after the May 7 Kentucky Derby.

Foals are frolicking in pastures, their mothers hovering nearby. Flowers are blooming and trees are budding, adding splashes of pink, yellow and white to panoramic scenes of green pastures and black plank fences snaking along the rolling countryside. Fans flock to Keeneland race track, and later in the spring to Churchill Downs, the iconic Louisville track that’s home to the Kentucky Derby.

“It’s the best time of year to drive through Kentucky and see all the farms and just experience what horse country really is,” said Jen Roytz, marketing director at Three Chimneys Farm, a popular destination.

Three Chimneys covers about 2,300 acres, but public tours are limited to the stallion and breeding operation, where some famous names ply their trade in perpetuating the bloodlines that could produce the next Triple Crown champion.

The hour-long walking tours are available Tuesdays through Saturdays throughout the year based on demand, with a few exceptions.

The farm limits visits during the busy Derby week, but will offer an open house to the public on May 5 — the Thursday before the Derby. The open house, from 10 a.m. to 1 p.m., will give visitors a firsthand look at the farm’s stallion operations.

The peak time for public tours is in spring and again in fall when there’s live racing at Keeneland, a 10- or 15-minute drive away. The farm charges $10 per person for tours, and the proceeds go to charities.

During the tours, visitors follow the footsteps of the stately stallions, with glimpses into their pampered lives.

There’s a stop in their barns — eye-catching structures with stone exterior walls and high ceilings inside. The spacious stalls are matted with thick layers of straw. Nameplates the size of a CEO’s adorn the stalls to identify each occupant.

Tour guide Sue Clark talked about their daily routine. Each stallion is bathed and groomed daily. They get the best food. They exercise to keep fit. They lounge outdoors in tranquil pastures.

“I wish I was taken care of this well,” Tina Riggle, Jennifer’s mom, said later.

Visitors get up- close looks at the massive stallions.

In one barn, Big Brown was brought out from his stall. Ears perked, he stood serenely as cameras clicked away.

Mike Hays, a horse racing fan from Little Rock, Ark., was among the admirers of the horse that won the first two legs of the Triple Crown in 2008. Later, he jokingly said, “I lost some money on him in the Belmont (Stakes), but I forgive him.”

After Big Brown left, then came Point Given, winner of the Preakness and Belmont in 2001.

Both eventually were led outside to soak up the sunshine, their hooves clicking on the brick floor as they exited.

In another barn, the stall for Dynaformer, one of the world’s top sires, was empty. The sire of 2006 Kentucky Derby winner Barbaro was already outside. Stallion groom Veronica Reed, pitchfork in hand, was busy cleaning his stall. Each horse has its own personality, and Dynaformer is known for his attitude.

“He just knows what he’s worth, he knows who he is and acts like it,” Reed said with a hint of pride.

Cameras clicked as visitors strolled to the pasture where Dynaformer was drinking water from a bucket.

Another photo opportunity came at a statue to the late, great Seattle Slew. The statue, nestled among stately trees, is a short stroll from the barn where the Triple Crown winner spent most of his post-racing life as a leading sire.

The tour stopped at the barn where mares are checked in before breeding. Vans had already arrived to drop off each would-be mother for her afternoon rendezvous in the breeding shed. Visitors learned about the role of the “teaser” horse, a male stand-in that checks out the mare to make sure she’s ready for mating with a high-priced stallion.

Visitors had the option of attending a breeding session. Soon, they were gazing into the breeding shed as one of the afternoon’s quick dates was consummated. Perhaps it was the start of a future champion, Clark said.

At Claiborne Farm outside Paris, north of Lexington, visitors see the farm’s stallions, breeding shed and cemetery, where the immortal Secretariat is buried. Ashford Stud near Versailles allows guests to get a look at its stallions during a tour.

People can call or email the farms to set up appointments to visit.

Meanwhile, an organized touring system is in the works for horse country. Kentucky thoroughbred owners and breeders are working with several area tour companies to allow people to book tours with participating horse farms. Each tour company would provide transportation. People will book tours through a Web site — http:// www.horsecapitaltours.com — that lists the participating farms and times for tours.