From the time he started playing sports, Patrick Towles was never a me-first athlete. No matter what sport he was playing, he was always team-first.

Now for the first time, he’s had to make a selfish decision and put what is best for him first.

That’s why he decided when the University of Kentucky’s football season ended that he would not return for his final season. Instead, the quarterback who grew up dreaming of playing for UK and started 22 straight games in 2014- 15 will transfer for his last season.

“I did have to be selfish, which made the decision easier,” said Towles. “That hurts me to even say that. I love this place and love all about it and love my teammates. But I have got to recognize what I feel I am called to do in the future and doing that leads to changes.”

He will be eligible to play immediately at another FBS school next season as a graduate transfer.

Several schools have shown interest in Towles. He finished his UK career with 5,009 passing yards and 5,452 yards of total offense, the sixth-highest totals in program history. He threw 24 touchdowns and 24 interceptions with 11 rushing touchdowns. 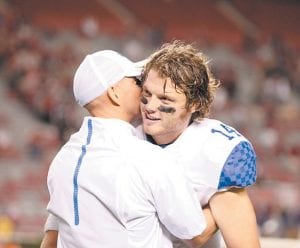 Patrick Towles grew up a Kentucky fan and never imagined a day would come when he would start 22 games as a sophomore and junior and then transfer somewhere else for his final year as he is now doing. (Photo by Vicky Graff )

He was benched in favor of redshirt freshman Drew Barker in last season’s final two games.

He says has “two or three” schools he’s looked at the closest and should have an announcement soon.

“I have one shot at it. I have 12 games left to convince NFL scouts that I am worth an investment,” Towles said. “I have some tape. I had the honor of starting 22 games here at Kentucky. I’ve got to add to that tape and put some good games out there and some wins on the table and see what happens.” 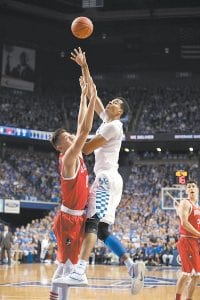 Skal Labissiere is struggling to meet lofty expectations but teammates insist what he’s going through is not unusual. (Photo by Vicky Graff )

“You’ve got to roll with the punches and move on,” the quarterback said. “It was super hard on my parents — the criticism. I understand you are an SEC quarterback and in Lexington it’s a fishbowl where everybody knows everything. When people say stuff about me, I understand. But my family hurts for me. They are not excited about me leaving. They live in Paris now. I have never been more than hour away from my parents in my life. But they know this is the right move.”

He says he knows there were “Towles loyalists” and he’s appreciative of them. That includes some media members he felt treated him fairly from high school until now.

“People have always had my back. Those are the kind of guys in the media that when stuff was getting bad, they didn’t just throw me under the bus. They were fair. Some guys just never put me under that bus. God willing, if I play in the NFL some day, I will remember that kind of stuff and who I developed good relationships with. My family is very appreciative of the way a lot of fans and some media members treated me and it did not go unnoticed,” Towles said.

“I will be a fan of Kentucky the rest of my life. I know how Kentucky fans are. I am one of them. I appreciate how passionate they are. I got a ton of great feedback from fans and a lot of people continue to support me. I appreciate that.”

Towles was a major catch for then-Kentucky coach Joker Phillips when he verbally committed early after leading Highlands to a second straight state championship as a junior. He added another one as a senior.

Randy Sanders, who often ignored him on the sideline during games. The next year Mark Stoops took over from Phillips and Neal Brown was the new offensive coor- dinator. He told Towles what he had to do improve during a redshirt season. Towels started 12 games in 2014 under Brown.

“No doubt about it. I got a lot better my redshirt year,” Towles said. “I was sad to see coach Brown go after my sophomore year. But I was happy for him because he got a head coaching job (at Troy). But no matter what, I wanted to play here my whole life and I always told myself that even if I was not good enough to play, I was not going anywhere. That has changed.”

When Brown left, Stoops brought in Shannon Dawson as offensive coordinator and Towles won a preseason competition with Barker and started the first 10 games. Neither Brown nor Dawson used the “pro-style” offense that Phillips ran with Sanders when Towles was recruited. Yet Towles says playing in a pro-style offense is not a given in where he’ll decide to play next season.

“I wasn’t necessarily happy with the way things were going,” said Towles, adding that he likely would have transferred even if he had not lost his starting job. “Despite what some people might think, I am a huge supporter of coach Brown and coach Dawson. But you have got to have a fullscale commitment around the program and I do not think there was. Those guys gave me a chance to play and start. I appreciate them.

“There are just other factors that did not necessarily allow me to be as successful as I could and they are out of my control. If you had told me I would start two years and then leave for my fifth year, I would have said you are crazy. But I recognize the situation for me here is not as prolific and auspicious as I would like it to be. I just had to make the best decision for me.”

He told Towles to follow his heart and gut — the same things he did in sports and politics.

“He has not tried to sway me one way. He just wants me to do what is good for me,” Towles said. “He has been there, done that. He’s thrown a no-hitter at Fenway Park (in Boston). He’s had a perfect game in New York (for the Yankees). It’s not like he is a crazy grandpa talking. He has done things as a competitor that I want to do.

“I take everything that he says to heart. I remember we had lunch at Frisch’s before the season started and he was talking about the attitude it took on the field to be successful. There was never a doubt about what type competitor he was. If I continue to adopt his competitive edge, I should be successful. I remember that daily.”

Wenyen Gabriel has never had any doubts about his decision to play at Kentucky. But the Massachusetts prep standout felt even better after scoring 24 points and grabbing 10 rebounds in a win in Lexington Saturday a few hours after he watched the Wildcats beat Arizona State in Rupp Arena.

“I don’t think I could fit better anywhere else in the country. I think this is a place where I can develop and get more development than I could get anywhere else. Playing against all these players every day and all the competition, that’s where I really thrive.”

He helped take over the game against 7-foot Thon Maker and Athletes Institute of Canada in the second half Saturday night to make his trip to Kentucky even better.

“It’s exciting to be here in Lexington. It’s where I’ll be next year. Having all the fans come and watch. But I was just anxious to win this game. I’m just happy we came through. I didn’t play that well, but we kept playing hard so I’m happy we came back,” Gabriel, a power forward, said. “I was just trying to stay focused on the game. The attention is nice and all. I like it here. Basketball is really big over here.

“A lot of people want to take pictures, autographs and all that. It’s something different from where I’m from. It’s different but I like it.”

Kentucky freshman Skal Labissiere’s struggles have drawn so much attention that even Towles — who knows plenty about taking criticism — says he feels sorry for Labissiere and those close to him.

“I feel for him. So much is being put on him and now he is not always able to execute like he wants and not everybody understands he is still trying as hard as (he) can,” Towles said. “That can be hard on you and your family and friends.”

Labissiere did not have a point or rebound in the win over Arizona State. It was a continuation of a recent slump that has left coach John Calipari and UK fans frustrated.

Labissiere came here from Haiti and settled in Memphis with guardian Richard Hamilton and his family. He missed his high school junior season with an injury and then was ruled ineligible for his senior season after transferring to a new school. That left Hamilton to put together a travel team that had little talent except Labissiere.

Now despite his superb offensive skills for a 7-foot player, Labissiere is struggling to be productive and regain his confidence.

“That happens your freshman year. You come in with a huge head. I personally did, I know I did. It’s kind of a reality check. Then once you get the reality check and once you know that your team is behind you, you’re going to do fine,” junior Marcus Lee said.

Lee said he has told Labissiere his problems are “normal” for freshmen at UK.

“That’s kind of what he has to realize, is that we’re all going through this. Especially since it’s Skal, we’re pushing him toward such a high standard that if he’s anything short from that then he’s getting yelled at. That’s what he doesn’t realize yet, is that he has to go at everything so hard and that’s what we’re just teaching,” Lee said. “Because everybody’s going to go at him. He’s the top one or two pick (in the 2016 NBA draft). He’s the bar that’s been set and he has to figure that out. He’ll do great at that.”

Another player who understands confidence problems is junior Derek Willis, who got to play more than normal against Arizona State because of Labissiere’s problems.

“He just needs to work through it and keep going to the gym and keep working. That’s just how you get better. Just keep working. It’s still early, and he’s a young kid who hasn’t done this much before so it’s all new to him. He’ll get it down,” Willis said.

Freshman guard Jamal Murray has had his own consistency issues. He says Labissiere is “one of a kind on offense” and just needs to focus on rebounding.

“He just needs to fight, get in the paint and grab rebounds for us,” Murray said. “Cal is just getting him to get more rebounds, getting him to fight and be more aggressive. Hit somebody. That’s the only thing with him. His offensive skill set is like no other. He gets the basketball, if he shoots it, you know it’s probably going to be a good basket.”