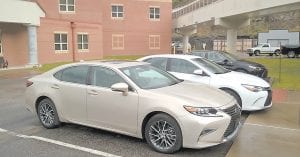 Letcher County native Jeff Everidge works at Toyota Motor Co. in Georgetown and arranged for the gift to the school.

Toyota donated three new cars to the center this year to help students learn how to work on them. Until February, the only vehicle ever donated to the center had been a used school bus, diesel mechanics instructor Daryn Pigman said.

“It’s the first thing new we’ve ever had donated to us,” Pigman said.

The cars include a Toyota Camry, a Toyota Avalon and a Lexus. Two are 2015 models and one is a 2016. Two were test cars and one was rejected for a defect when it left the assembly line. The cars arrived at the end of February. Students will disassemble and reassemble brakes, suspensions and other systems to learn how to perform simple maintenance tasks once they get out of high school.

“They’re not torn up so there’s nothing really to fix,” Pigman said.