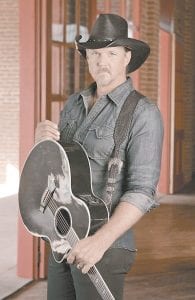 He worked as an oil rig roughneck, nearly drank himself to death and was shot in the chest by his ex-wife.

Friends always told country star Trace Adkins his life would make a good book. And so it has.

“A Personal Stand: Observations and Opinions from a Freethinking Roughneck” is part autobiography, part opinion. And regardless of where you stand on issues like the Iraq war or illegal immigration, it’s entertaining because the life of Adkins plays out like one long country song.

Released last month, the book is the first in a one-two punch for the 6-foot-6 singer with the deep baritone voice. His “American Man, Greatest Hits Volume II” came out last week.

“I’m not out to change the world or change anybody’s opinions or whatever,” he says. “I wanted to answer some questions that I get asked frequently once and for all.”

Adkins, 45, doesn’t hold back in his book. He discusses his alcoholism (he’s been sober five years), his failed marriages (he’s on his third) and his differences with his longtime record label Capitol Records Nashville (he felt dissed by the label when Garth Brooks was going gangbusters in the ’90s).

And he discusses that night a bullet pierced his heart.

As Adkins describes Feb. 21, 1994, his second wife grew angry over his latest drinking binge and told him to leave. They argued and she ended up pointing a .38 pistol at him. He made a threatening remark and tried to disarm her, and she shot him.

“The doctors held little hope that I would survive and told my family and friends to go in and say goodbye,” he wrote.

But the ordeal did have a silver lining (sorry, for that you’ll have to read the book).

A self-proclaimed conservative, the singer isn’t shy about sharing his thoughts. Global warming? “They say that Mars is getting warmer, and nobody lives there.” Nuclear energy? “You know, I hate to praise the French for being sensible about anything, but like the Japanese, they’re getting 70 percent of their electricity from nuclear power.” Public education? “The hoops that you have to jump through to be able to get rid of a mediocre teacher are just ridiculous.”

Adkins says his book is, after all, just that – HIS book. There’s a time and a place for entertainers to express their views, and a book is that format.

“On stage when I’m doing a show I don’t do this. I don’t use the stage as a platform to rant and rave about how I feel, and I resent those who do that. That’s not what fans came to the show for,” he said.

His producer, Frank Rogers, said although Adkins is opinionated, he doesn’t spout off blindly.

“He speaks strongly about what he believes in and has facts supporting all of his feelings and thoughts,” Rogers said. “Probably because of some of the songs he’s put out people think he’s a big old dumb redneck, but the truth is he is a very, very intelligent guy.”

Raised in Sarepta, La., Adkins played the Southwest honkytonk circuit for years before coming to Nashville to pursue a record deal. He signed with Capitol Records Nashville and scored right away with his 1996 debut, which spawned the No. 1 hit “(This Ain’t) No Thinkin’ Thing.”

But his next couple albums stalled, and he was in danger of going down as a flash in the pan until his 2001 album “Chrome.” Since then, the hits have come at a steady clip: “I’m Tryin’,” “Then They Do,” “Hot Mama,” “Songs About Me” “Honky-tonk Badonkadonk,” “Ladies Love Country Boys.”

Adkins, who mostly records songs written by others, became a member of the Grand Ole Opry in 2003.

“Trace is a great storyteller,” Rogers said. “He really gets into the character of the song, whether it’s a fun, up-tempo honky-tonk thing or a story song that happened 200 years ago or a relationship song. No matter what, he kind of finds that place and really tells the story like it ought to be told.”