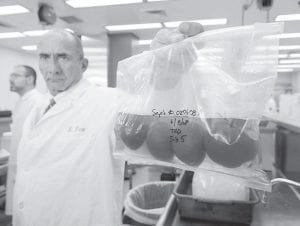 Food and Drug Administration detectives had a hot lead, narrowing down on a grower who just might have supplied salmonella-tainted tomatoes. Then the patient changed her story: She’d eaten a round tomato, not a Roma one after all.

“We basically had to throw it all out and start over,” says Dr. David Acheson, the agency’s food safety chief.

Why is it taking so long to find the source of those bad tomatoes? It largely boils down to the frailty of human memory and the mysteries of the tomato bin.

Unlike many other foods, tomatoes don’t come with bar codes that let investigators quickly track their supplier. Consumers seldom even know what part of the world they were grown in.

Moreover, it can take two to three weeks between when someone ate a tainted tomato, got sick, got diagnosed and health authorities complete testing showing it’s the outbreak strain.

And that’s if people bother going to the doctor. Few do. A common estimate is that there are 40 cases of salmonella for every one reported to the health authorities, warns Caroline Smith DeWaal, food safety director at the Center for Science in the Public Interest.

Do the math – 228 officially listed illnesses in 23 states – and it’s clear that “this is a very large nationwide outbreak,” she says.

Do some more math: The shelf life of tomatoes from the time they’re picked is three to four weeks. The earliest known salmonella case was April 10, and the latest June 1. So while it’s not clear that all the bad tomatoes are off the market, most illnesses struck in May – and no culprit tomatoes have been found sitting in anyone’s refrigerator.

Contrast tomatoes to the 2006 outbreak of E. coli in spinach. A supplier began recalls within days of the FDA’s warning. About two weeks later, the mystery was solved.

The helpful difference: The raw spinach came in bags that some patients still had in the refrigerator, bearing UPC codes that led investigators to a supplier and eventually to the exact field that had been contaminated by wild boars.

Nearly a month into the salmonella probe – health authorities learned there was an outbreak on May 23, although tomatoes didn’t become a suspect until May 31 – authorities have run into a number of dead ends, like the woman who didn’t really remember what she ate.

Enough people did remember what they ate for authorities to know that the culprit had to be raw red plum, red Roma or red round tomatoes. It has proven easier to rule a tomato-growing region innocent than guilty. Simply by using harvest and sales records, the FDA has cleared tomatoes from more than 30 states and countries – check http:// www.fda.gov for an updated list.

Parts of Florida and Mexico remain leading suspects because they were supplying “the vast majority” of tomatoes sold in April and May in states where people got sick, Acheson says.

The Produce Marketing Association, an industry group, earlier this year began pushing growers and suppliers to take a voluntary first step to make fresh produce more traceable in case of outbreaks: Putting codes on the boxes they’re shipped in would help authorities track the different stops they make from farm to packer to supplier to store or restaurant.

A bigger change is coming as, thanks to a newly passed law, fresh produce later this year will start bearing labels that identify the foods’ country of origin. U.S.-grown produce must bear the labels, too. About 60 percent of the top 40 produce items already bear some labeling, mostly brand-type advertising such as “Washington apples” or “Jersey fresh,” says PMA vice president Kathy Means. But tomatoes are among the least labeled, and will have to change.

“The technology exists today that would allow for much better traceback of commodities like tomatoes, but it won’t be used until the industry is required to by the government,” says consumer advocate DeWaal.

Her Center for Science in the Public Interest petitioned the FDA almost two years ago to require all growers to have a written food-safety plan that included how they trace their produce. The FDA hasn’t ruled on that petition; she calls Congress’ passage of country-of-origin labels a first step.

The FDA just asked Congress for an extra $125 million for food safety programs next year, and better traceback – along with more inspections and other contamination prevention steps – are among Acheson’s plans for spending it.

But don’t assume a sticker saying what country tomatoes came from would have cracked the salmonella case, Acheson stresses. It might even have complicated it if, say, a sick consumer swore he always buys California tomatoes but last week the store substituted ones from Mexico or Florida and he didn’t notice.

“You can wind up in a bad place because of that,” Acheson says.

“It is hard enough for folks to remember what they ate, let alone where it was from,” agrees the produce industry’s Means.