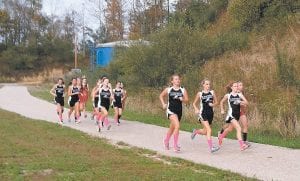 On October 15, Letcher Central’s cross country team held its first ever Senior Night and was host to its annual Cougar Climb.

The evening began with a ceremony recognizing the five seniors on the team. Each was recognized and was escorted down the shoot (finish line) by family members, where the senior was then presented with gifts from family, friends and teammates as well as a plaque from the team.