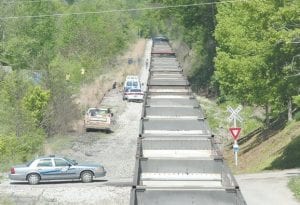 Michael “Shaun” Fields, 35, was killed Sunday afternoon when this train struck him, apparently while Fields was lying on the track near the old South East Coal Co. Sewanee Tipple at Isom. (Photo by Craig Dixon)

Police are investigating the death of a 35-year-old Isom man who was hit by a train Sunday afternoon.

Michael “Shaun” Fields was lying between railroad tracks near Tipple Road in Isom when a train struck him at 2:42 p.m. on May 11, said Kentucky State Police Det. Randy Combs, who reviewed surveillance footage of the incident captured from a camera aboard the CSX train.

“They blew their horn and hit their brakes real hard,” said Combs. “He never made any effort to move, except his head a little.”

An autopsy was performed in Frankfort by the state medical examiner’s office.

The son of the late Michael and Rhonda Hatton, he is survived by his girlfriend, Chasity Collins of Isom; two sons, Michael Fields of Madison, Ala., and Nick Collins of Isom; a daughter, Ashley Collins of Isom; a brother, Ronnie Scott Cupps and wife Teresa of Huntsville, Ala.; two sisters, Rebecca Blair and Robin Dismuke, both of Huntsville, Ala.; grandparents, Christine Smith and Raymond Rosales; an aunt and uncle whom he called mom and dad, Donna Blair and Rodney Blair of New Hope, Ala.; aunt and uncle, Connie and Carlo Cornett of Blackey; and a cousin, Justin Cornett and wife Jacqueline of Letcher.

Visitation begins at 6 p.m. on May 14 at Letcher Funeral Home.

Funeral services will be held at 11 a.m. on May 15 at Letcher Funeral Home. Burial will follow in the Pearl Dixon Cemetery at Blackey. In lieu of flowers, donations are suggested to help pay for funeral expenses.