‘Transformers’ gets a great savior in ‘Bumblebee’ 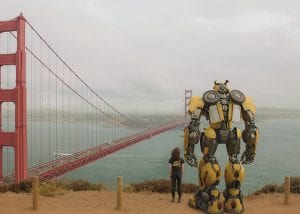 Hailee Steinfeld as Charlie with Bumblebee in a scene from “Bumblebee.” (AP)

The “ Transformers” movie universe has lately been leaky and rusted out. It’s become shorthand for bad blockbuster moviemaking — male-driven, mindless spectaculars with sophomoric humor. How can it be saved? Just hand the keys over to some talented women.

“Bumblebee,” the sixth film in the series, is a standalone original story written with disarming skill by Christina Hodson and starring the gifted Hailee Steinfeld. It’s a charming tale of a girl and her adorable car-robot, flipping the script on the tired, bloated franchise. While hard-core fan-boys may complain it’s too soft, this film may turn out to be the perfect way to save “Transformers.” Could Bumblebee rescue Optimus Prime this time?

“Bumblebee” is set outside San Francisco in 1987, where the loyal B-127 Autobot has been sent to protect Earth and prepare the groundwork for the franchise (He’ll befriend Shia LaBeouf at the start of the first film.) Badly hurt while battling two evil tracking Decepticons, he loses his voice and memories. Then he disguises himself as a vintage Volkswagen Bug and waits for deliverance in a salvage yard (not unlike the entire “Transformers” universe).

He’s discovered by gothy misfit Charlie Watson (Steinfeld), who is fond of car repair, Motorhead Tshirts and listening to The Smiths. She is still mourning her dead dad and feels generally unheard. For her 18th birthday, Charlie drives off with the junked VW that has a whole bunch of secret options.

Despite discovering that the car is, in fact, an alien, she feels a kinship to this mute metal giant with expressive eyes, calling him Bumblebee. He, too, is unheard, but learns to communicate using word snippets he hears on the radio. She warns that bad guys are sure to come and take him away, but she will protect him. “People can be terrible about things they don’t understand,” she tells him.

Thus starts a sort of “E.T.” for 2018, in which Charlie and Bumblebee outfox another pair of Decepticons, the entire U.S. Army (led by a mechanical John Cena) and her distracted mom and stepdad. If the film seems to have that kid-sized, wistful ‘80s Steven Spielberg feel, it might be because Spielberg serves as an executive producer. (Franchise helmer Michael Bay has been exiled from the director’s chair to the executive suite.)

Hodson is the first woman to originate and write a film in the $4.3-billion “Transformers” franchise and she proves extremely capable of blending loud action with human pathos, not to mention tart with sweet, though she gets dangerously close to maudlin when it comes to Charlie’s dad. “I can’t lose you, too,” the young woman tells the yellow robot. Steinfeld nails teen alienation but also can turn on empathy beautifully and has a winning cockiness. Plus, she sings the movie’s signature song. (Talk about a transformer).

Hodson and director Travis Knight (“Kubo and the Two Strings”) take full advantage of the film’s late- 1980s setting to give us visual and audio jokes. Steve Winwood’s “Higher Love” plays during a montage as Charlie lovingly restores a muscle car, and Sammy Hagar’s “I Can’t Drive 55” blares during a car chase. This is the 80s, so expect plenty of Walkman, Pop- Tarts, “Alf ” and “Miami Vice” references. And look for a moment when it seems like the very internet itself gets created, a clever lowkey touch.

Hits by Bon Jovi, Duran Duran, a-ha, Tears for Fears and Wang Chung are sprinkled throughout. (Bumblebee turns out to be quite a good music critic, too, hilariously rejecting some of Charlie’s options). Die-hard franchise fans also get to hear the power ballad “You Got the Touch” that appeared in the 1986’s animated “Transformers” film. (Well played, filmmak- ers.) They’re also true to the universe — Bumblebee will eventually change at the end to what he becomes when Bay was in charge, a Chevrolet Camaro.

After so many over-thetop battles in the metalthumping series, it’s fun here to watch Bumblebee commit more small-scale mayhem, like egging someone’s car. The robot is rendered as a sort of distracted, flaky adolescent teenager and a sequence in which he’s left home alone is priceless. One caution: Younger viewers are advised to watch the 1985 iconic film “The Breakfast Club” — it comes up several times rather brilliantly, especially in one final scene with Cena which refreshingly doesn’t go trite.

Hard-core fans may be unhappy that there’s not enough robot-on-robot violence or turned off by the meet-cute between teen and bot, but hopefully it will attract an audience either tired or turned off by the franchise’s past rigidity and addiction to spectacle. This is what we needed: Smaller, quieter, more human and sweeter.