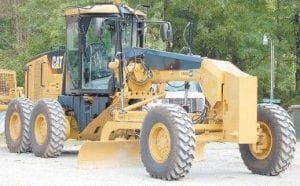 The Letcher Fiscal Court voted to pay $168,267 for this road grader photographed at the Mayking highway garage.

Members of the Letcher Fiscal Court say more workers need to be hired to help keep the Fishpond Lake recreational area and other county parks clean of garbage and free of vandalism.

“I’m getting cussed on a regular basis about Fishpond,” District Five Magistrate Wayne Fleming at a special court meeting held July 10. “The biggest problem is garbage. If you don’t empty it every day it’s going to be on the ground.”

District Three Magistrate Codell Gibson said someone should be hired permanently to pick up trash.

“If you are paying 40 hours that is all they can work,” answered Judge/Executive Jim Ward.

Letcher County Attorney Harold Bolling said if an employee works more than 40 hours he or she would have to be paid for the additional hours worked.

“There are just some built-in problems,” said Bolling.

“Have a county worker up there every day, that would be 40 hours a week, and then hire someone just to work the weekends,” said Gibson. “That would be the easiest thing to do.”

District Four Magistrate Keith Adams said there is no way one person can keep the area around Fishpond Lake clean.

“Eventually you are going to have to have people working there 24/7 and pay whatever it takes,” said Fleming. “It’s booked up solid and you are going to get beat to death — we are — for not keeping it clean. This is turning out to be a big, big

“As long as I have been in county government that place has been destroyed,” said Bolling.

Fleming said Letcher County is reaching the point where its public parks are as good as those found anywhere else, but that a price comes with that success.

“We are getting to the point where we are going to have to have a park ranger with arresting powers,” said Fleming. “Let him make his rounds from Thornton to Jenkins to Eolia and keep an eye on some of this stuff.”

Fleming suggested charging a fee to camp on the Fishpond Lake grounds, but said he would not agree to charging people to fish.

“I’ve always opposed charging people anything, but even the people coming there now to camp talk like they would be willing to pay something,” said Fleming.

“I’ve had several people at the camp say they would be more than willing to pay,” said Ward.

In other business, the court approved the purchase of a 1993 semi-trailer for $7,000 from Gary Crown of Letcher County. Ward said the truck, which has 750,000 miles on it, will be used to haul recyclables to Lexington.

The court also approved giving Ward authority to look at new and used garbage trucks and to make purchases.

Ward said when a large packer breaks down it throws the schedule off and workers either have to wait for another large packer to meet them or a smaller packer has to make a trip to the transfer station. Ward said a new large packer costs about $120,000.

District One Magistrate Bob Lewis said he had heard the sanitation department was $400,000 in debt when he became a magistrate and asked where that figure stands now.

The court also approved payments of $168,267 for a Caterpillar road grader and $73,533 for a new Challenger MT445 wheeled tractor, both purchased from Whayne Supply.

Ward said the new grader is steered with joy sticks instead of a steering wheel.

Ward also reported to the court that results from air quality tests must be received before the old A&P building in Whitesburg can be demolished to make room for a new $6 million recreation center.