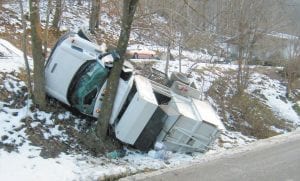 Letcher County Sanitation Dept. driver Larry Sturgill escaped injury when this “mini-packer” slid on an icy driveway and rolled down a hill beside KY 7 near Deane. The accident is expected to lead Letcher County Judge/Executive Jim Ward to ask the Letcher Fiscal Court for changes in the way the county’s garbage is collected.

An accident in which a sanitation worker narrowly escaped serious injury is expected to bring changes to the way trash is collected in Letcher County.

Letcher County Sanitation Dept. driver Larry Sturgill somehow escaped injury on Dec. 30 when the “mini-packer” truck he was driving slid off an icy driveway near Deane and rolled over a hill, crushing the truck’s cab along the way. As a result of the mishap, Letcher Judge/ Executive Jim Ward is expected to ask the Letcher Fiscal Court later this month to approve changes that would require county sanitation customers to leave their trash for collection in a container placed beside a public road.

The accident occurred on a private driveway just above the main road on Kentucky Highway 7 on the Deane side of Rockhouse Mountain. Ward said the incident illustrates the importance of county sanitation customers “curbing” their garbage (taking it to a point next to the highway) rather than expecting sanitation workers to come onto their property to pick it up.

Sturgill escaped injury only because he was thrown sideways, causing him to miss being struck on the head by the collapsing top of the cab. The truck turned on its side and was kept from landing on KY 7 by hitting a tree. Sturgill was able to crawl out of the truck through a narrow opening in what was left of the cab, then faced a second obstacle when he encountered electricity from a power line which had been grounded against the tree. Ward said Sturgill could feel the electricity to the point that he felt like it was “eating him up.”

Sanitation Coordinator Gary Cornett said icy conditions caused the truck to begin sliding. Cornett said the road in question is a private gravel road that is not maintained by either the county or state road departments. Ward said the county will have to insist that people curb their garbage to ensure the safety of county workers. Cornett also said the issue is one of safety.

Ward said he knows that insisting that garbage be curbed might not be popular, but added that he could not ask county workers to put their lives at risk over an issue of convenience to customers.