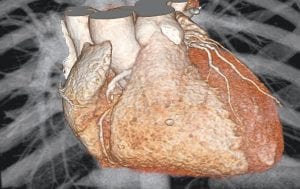 This image provided by Drs. Udo Hoffmann and Michael Lu, of Massachusetts General Hospital, shows a 3-D fast CT scan computer rendering of a heart in a patient who has stable chest pain. A new study shows that people checked with a heart CT scan after seeing a doctor for chest pain have no less risk of heart attack, dying or being hospitalized months later than those who take a simple treadmill test or other older exam.

People checked with a heart CT scan after seeing a doctor for chest pain have no less risk of heart attack, dying or being hospitalized months later than those who take a simple treadmill test or other older exam, finds a big federal study.

The results are a surprise: CT scans, fancy Xrays that give 3-D images of heart arteries, were expected to prove best and instead turned out to be just a reasonable alternative. Doctors have used these scans for a decade without knowing whether they are better than traditional tests. The federal government funded the $40 million study — the largest ever of heart imaging — to find out.

But the study also wound up exposing how much medical radiation most patients like this — 4 million in the United States each year — are getting. Radiation can raise the risk of developing cancer, yet few doctors are choosing heart tests that do not require radiation, the study revealed.

“It’s such a bad reflection on American medicine,” said one independent expert, Dr. Eric Topol of the Scripps Clinic in La Jolla, California. “Look at how much radiation they gave these poor people,” equivalent to 500 to 700 regular X-rays, he said. “That is despicable.”

If more patients were told the radiation dose before agreeing to a test, more would end up with safer alternatives, he said.

The study involved more than 10,000 patients in the United States and Canada. Results were revealed over the weekend at an Ameri- can College of Cardiology conference in San Diego and published online by the New England Journal of Medicine.

Chest pain can stem from something as serious as a clogged artery or as harmless as indigestion. CT scans are widely used to diagnose heart problems in emergency rooms. But their value isn’t known for people who go to a doctor with new but stable, less severe symptoms suggesting hidden heart disease.

In the study, half of the patients were given CT scans. The rest got whatever other test their doctor chose to evaluate how well their heart was working — a sign of whether it is getting enough blood from heart arteries.

Only 10 percent of doctors chose the simplest test — monitoring the heart with an electrocardiogram (ECG) while the patient walks on a treadmill. It involves no radiation.

About 23 percent got an echocardiogram — an ultrasound, which uses sound waves instead of radiation. A whopping two-thirds got nuclear stress tests, in which radioactive dye is injected to make the blood vessels show up on pictures. It’s the most costly test, and it involves more radiation than a CT scan.

The aim of the study was to see which test led to the best diagnosis and treatment, thereby preventing the most deaths, heart attacks and hospitalizations for heart-related reasons over the next two years.

Only 3 percent of patients had one of these problems regardless of what kind of test they got. It suggests that many of them may not have extensive testing at all, just medicines to address risk factors such as high blood pressure or cholesterol if their treadmill test was OK, Topol said.

CT scanning “more accurately detects blockages and also more accurately excludes them,” said Duke University’s Dr. Pamela Douglas, who led the study. Deciding on a test is “a choice that doctors and patients should be making together.”

Radiation doses are falling as CT equipment improves, but the study “does expose that there are risks to many of these tests,” said Dr. Jeffrey Kuvin, one of the cardiology conference leaders and cardiology chief at Tufts Medical Center in Boston.