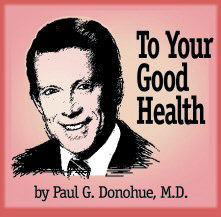 DEAR DR. DONOHUE: My father emigrated from the Soviet Union after World War II. As a young man, he lost three fingers to frostbite, but he didn’t like to talk about it. I live in a region that has harsh winters and often wonder about frostbite. How do you treat it? — O.S.

ANSWER: Frostbite is an apt term, as ice crystals actually form in the tissues where it happens. The crystals do some of the damage, as does a loss of water from affected cells. However, the greatest amount of damage comes from the disruption of blood supply to the frozen area.

Frostbite can happen anytime the temperature is below 32 F (0 C). It can happen at higher temperatures when the wind is blowing hard. Fingers, toes, hands, feet, chin, nose and ears are the most exposed parts of the body, and they are the ones most likely to be frostbitten.

Frostbitten skin should be warmed in a water bath with a temperature between 99 and 102 F (37 to 39 C). Don’t begin the rewarming process if there’s a chance of refreezing, which causes greater damage than the first freeze.

With first-degree frostbite, the skin turns red and swells, and people complain that it hurts. Rewarming the skin brings about full recovery.

In second-degree frostbite, the skin becomes white, and people feel little pain. In about 12 to 24 hours, blisters appear and even three to 10 days after recovery, the affected area still throbs and aches but should be functional.

In third-degree frostbite, the entire depth of skin is frozen and is black and dry. This degree of frostbite generally indicates loss of the skin and frozen tissues.

If you’re interested in a small book packed with information on cold injuries, take a look at “Hypothermia, Frostbite and Other Cold Injuries” by Gordon Giesbrecht and James Wilkerson, printed by The Mountaineers Books.

Dr. Donohue regrets that he is unable to answer individual letters, but he will incorporate them in his column whenever possible. Readers may write him or request an order form of available health newsletters at P.O. Box 536475, Orlando, FL 32853- 6475.