Trip to mountains was full of unplanned activity 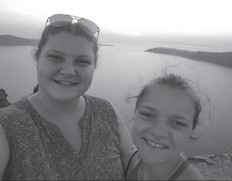 Jessica and Katelyn Nottingham, daughters of Scott and Anna Nottingham, are traveling in Greece with a Latin group. This photograph was taken on Day 7, the first day in Santorini, Greece.

Hello everyone! As I start this column this morning it has rained all night in this part of the Ohio Valley area and lots of other places. We have flash flood warnings all over the place.

Tornadoes touched down in a couple of places not too far from Harrison, and the field next to our house that is owned by the Hamilton County Park District was flooded with water. At least our house is built on a knoll.

Of course there was a bluegrass festival in the local area, just a few miles from my house.

I hope you have been enjoying the beautiful, warm sunshine as much as I am. The mornings are a wee bit too chilly for me. One morning as I enjoyed sitting on the porch swing, I could almost feel a touch of fall in the air, and here it is not officially summer yet. Six months from now we will be ready for Christmas.

The past month has been a whirlwind for me so it seems. I had planned a trip back to the mountains that is home in my heart as everyone who knows me knows.

When Daphne Korner realized I where I was going again, she decided to go with me. Some things we planned didn’t work out, and there were a couple of unplanned things that were nice.

Friday, we decided not to do anything too strenuous as we had planned to go to Campbells Branch Community Center. I tried to get in touch with Jack Adams to no avail as Jack works so much and doesn’t check his phone.

When Daphne and I arrived at the center, a nice surprise was in store, as Jack was scheduled to play the bass. Even more of a surprise, as Jack and Fred Campbell switched instruments and much to my heart’s desire Jack picked the banjo.

I am really sorry to hear that Bordus Adkins had a serious injury to his hand so he will be limited for using it for a while. I really missed seeing Bordus and watching him dance. I hope he recovers very soon as everyone misses him.

Saturday, Daphne and I took an unexpected drive. It had been a long time since I had driven around the mountain road to Roxana, so I said what the heck, why not?

Then I drove across Tolson Creek Mountain, down the other side, realizing it had been several years since I had been across that way. When I got to the bottom, I remembered my brother Richie Hall had taken me that way, and I sort of followed my sense of remembrance, so it brought me out to familiar places, and we crossed Cowan Mountain to Whitesburg.

I fully realize why people are complaining about the roads in Letcher County being so terrible.

Saturday afternoon, a dedication was held at Carcassonne Community Center for Beckman Jent. Daphne and I had the pleasure of attending this event. Beckman was a wonderful person who was ready to help anyway he could.

After the dedication there were refreshments, and a beautiful cake. Yes, I ate watermelon and ,no, it didn’t like me.

Sunday was an unusual day as Daphne and I had plans that didn’t happen, so we were at loose ends for a little while. We took a drive that led us towards Pikeville, then on to Breaks Interstate Park. It had been about 27 years ago since I had been there.

Daphne and I really enjoyed the scenery, and we walked on a trail that could have ended in a bad situation. We were on the trail to something called Towers that had a tunnel. It was very difficult to manage with a cane, however with Daphne’s help I managed for a long distance.

Daphne had helped me down, then I heard a noise. When I looked around Daphne was on the ground. At first I thought she had fallen. Instead a huge piece of bark had fallen from the top of a tree, hitting Daphne in the head. The force was so strong it actually knocked her to the ground.

We were both grateful it wasn’t more serious. We even continued walking a bit farther until we were getting into very rough terrain, and we realized it would be difficult for me to get back up.

We ate at the restaurant, which was beautiful. Now the food looked good and the vegetable soup was edible. However it seems that genuine vegetable soup with homemade taste is somewhat hard to find.

We had a beautiful day and I wasn’t about to let anything disturb that, or so I thought.

Mike and Marcia Caudill invited us for a bonfire and marshmallows. Marcia had been pushing herself for several days, actually she was sick at the dedication but still wouldn’t give in. We decided not to go to Mike and Marcia’s so she could get some much needed rest. Daphne and I know there will be other times for a bonfire.

I called Jack Adams to ask if he would like to come down to the campus to play some music, but that didn’t turn out either much to my disappointment.

Daphne and I always go to Golden Apple for produce to bring back. Well unless my mind changes, which it probably will, I may be skipping that trip.

I am tired of disappointments and promises that someone has no plans to keep. If you don’t intend on doing something, please don’t waste your breath in telling lies!

When I am in the Whitesburg area for some time I try to visit Tommy Tindell at Letcher Manor Nursing Home. This last time trying to get an appointment was somewhat a hassle. For one thing I am not receiving good cell phone service. I called Friday to make an appointment to see Tommy Tindell and Buddy Grubbs, then I was told I couldn’t visit two people in the same day.

When I arrived Monday morning to see Buddy Grubb, I had no appointment. By that time, I was very aggravated. An employee asked me if I was Edgar Grubb’s wife, I replied, “No, I am his girlfriend!” I finally got to see Buddy. Oh, I did call Bernice to tell her what I did

Adventures for Daphne and me continued as this weekend as Vinoklet Winery Bluegrass Festival & Arts & Craft and was held locally. There were several bands scheduled along with Ma Crow & Co. Glen Herald was on the banjo for the group. Glenn did a great job.

Each band was scheduled for two shows, but we didn’t stay for the entire evening. I didn’t realize that I was sunburned on my legs, but oh when I got home I found I am a mess, and another sunburned face also.

Sunday afternoon, I switched friends and Vickie Power and I took a drive to Brookville Lake in Brookville, Ind. It has been sometime since Vickie and I have gotten to go anywhere together as Vickie works so much. It was so relaxing just watching the boats, especially the sailboats.

Johnny and Ann Calihan are still doing well, except Ann’s foot and leg are still giving her a lot of problems. Please keep prayers going for their daughter Carol Dieckman, who is back in the hospital again. I wish someone could get her out of the hospital and move her to Cincinnati.

My granddaughters, Jessica and Katelyn Nottingham, are touring with a Latin group in Greece at the present time. The group is really having a great time by the pictures my daughter Anna has been receiving. Oh to be that young and beautiful again, to be able to travel without aches and pains. I am just thankful to do the things that I am doing.

Hello to Steve Fields and his wife and everyone at Campbell’s Branch Community Center.

Daphne really enjoys going to Campbell’s Branch, and really enjoyed getting to learn the two-step. Thanks, Steve.

Hello Tommy Tindell and I won’t forget to send you a card for your birthday June 30. It is always good to see you. Aren’t you glad you only have to put up with me for 15 minutes?

Well, it is getting time to get this sent on its way. Until next time, Rose Ballard, 9110 Lawrenceburg Rd., Harrison, Oh. 45030, email: Bluegrassmama4@aol.com.