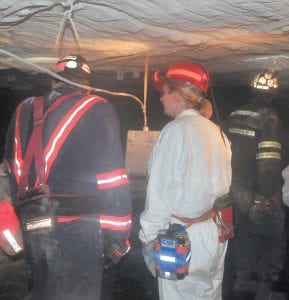 Reporter Sally Barto listened as the operation of a piece of equipment known as a “feeder breaker” was explained. (Photo by Chris Anderson)

While standing in mud about three miles back in Perry County Coal’s E-4 No.1 mine in Hazard, I began to miss my family. They felt so far away. My husband, Derek, couldn’t call me on the telephone to ask how my day was going or to tell me what our threeyear old son, Grant, said on the ride to preschool. I look forward to those calls.

Instead, I was on a three-hour underground mine tour organized by the not-for-profit organization CEDAR Inc. (Coal Education Development and Resource) with nine other reporters and photographers from other newspapers which serve the region, including the Lexington
Herald-Leader
and the Appalachian

I sat through safety training which began at 6:30 a.m. on Nov. 10 and learned how to activate a self-contained self-rescue device (SCSR), which is a metal container holding a mask that would give me about an hour’s worth of breathable air in the rare case something happened to contaminate the air being pumped into the mine. The trainer said if something happened in the mine we would be able to find more SCSR’s after each 30-minute walking distance.

Soon it was time to put on a pair of steel-toe boots and a belt with a SCSR attached to the left side of it. Then we all left Perry County Coal’s office building and packed into a van for the ride to the mine site. It was a challenge to climb into the van while wearing the SCSR, which added extra weight to the belt.

Once we arrived at the mine site, I took off the belt and put on white coveralls. After I put the belt back on, a mine employee buckled a battery pack to the right side of my belt. At least this evened the weight from the SCSR. After being shown how to attach a batterypowered light to the front of the special hard hat provided to me, I put on a pair of safety goggles and gloves.

After much anticipation, it was finally time to head into the mine. I hunkered down and scooted into a personnel carrier called a brake-car man-trip. Plastic covered both sides of the man-trip to keep out the cold air. As we started to ease down the slope, the first thought that came to mind was that it felt similar to a Dollywood theme park ride I was on during my eighth-grade class trip about 14 years ago. The mine superintendent, Bruce Maggard, sat quietly beside me before he pulled the plastic back so I could see the side of the mine wall, which was covered with crushed limestone known as rock dust. I’m not sure how long the ride on the man-trip lasted. It kind of seemed like time stood still.

It was much harder to get out of the man-trip than I thought it would be. The extra weight on the belt kept working against me. Once we got out of the first man-trip, we climbed into another one called a rail man-trip and headed back into the mine.

There were only about four of us in a car. Robert J. Zik, vice president of operations for TECO Coal, said about 10 to 12 miners usually fit into one car, sitting knee-to-knee on both sides. He said the man-trip ride is something you just get used to doing.

After the second ride ended a few of us climbed onto a rubber-tired diesel man-trip which took us closer to the working “face” of the mine. Then it was time to start walking. The ground was packed tight and covered in rock dust. At first I didn’t have any problems walking and the roof was well above my 5 foot 7 inch frame.

The farther back we walked, though, it seemed the floor got muddier and the roof got lower. As I tromped in mud, which was very slick at times, Zik explained to me that MSHA requires the mining equipment to be washed down daily to keep potentially explosive dust at bay. When I concentrated on not slipping in the mud, I would hit my head on the roof. That hard hat sure came in handy. It was hard for me to get used to looking out for the roof and mud at the same time. Needless to say, I stayed at the back of the pack for the majority of the tour.

As we kept walking I began to hear loud grumbling sounds that were coming from a long piece of equipment called a continuous miner. The operator uses the continuous miner, which has a large rotating drum armed with “teeth” (large bits made of tungsten carbide), to scrape coal from the seam, and he works nonstop. The freshly-mined coal is dumped into “ram cars” and transported to a “feeder breaker” which breaks up the big pieces of coal and keeps the conveyor belt which carries the coal outside from being overloaded.

We also watched a roof bolter drill and install bolts that hold the roof in place, a practice invented at a South East Coal Co. mine in Letcher County years ago which also involves another large piece of equipment.

Everything inside Perry County Coal’s E-4 No.1 looked to be well organized and regulated. Never for a second did I feel unsafe, just a little homesick.

It was interesting to watch coal miners go about doing their jobs, free from any outside distractions such as cell phones, the Internet, or television.

With the lights from our hats reflecting off the walls covered in the white limestone dust, the mine was lighter than I expected. The passageways in the mine were wider than I had anticipated, and for the most part the roof was about five feet tall and higher. Generally I could walk comfortably, but I did have to walk bent over a few times.

One of my favorite parts of the tour was looking up and seeing lights from a distance which ended up being three coal miners walking toward me. I eventually learned not to look in the eyes of whoever was talking to me while they had their light on, because it hurt my eyes. I’m sure my light hurt their eyes, too, before I learned to look off to the side.

I also liked learning that many of the miners have nicknames such as Hammer, Skillet, Maytag, Mountain Man or Ridge Runner. Other miners don’t know them by their real names, only by their nicknames. Some manage to get by without having a nickname.

The trip out of the mine seemed longer than the trip in, as we were going against the air intake and I felt a brush of cold air against my face. Zik said the ride out took about 40 minutes. With the underground mine tour lasting about three hours, I came out of that mine exhausted and woke up sore the next day. And I didn’t even do any work!

Before Nov. 10, I was truly clueless about what goes on inside an underground coal mine. Zik said the average coal miner makes about $60,000 a year. They work extremely hard for their wages and deserve to be able to work in safe and well-regulated mines such as this one operated by TECO. After missing my family as much as I did after being inside the mine for only a few hours, I can only imagine how much the working coal miners must miss their families while they are underground and totally out of touch.

My grandfather, the late Johnny Oakes of Weeksbury in Floyd County, was a coal miner for more than 30 years. My great-grandfather, the late B.F. Gish of Seco and Haymond, came to Letcher County as a working miner before working his way up to the position of mine superintendent with South East Coal Co., a job he held for many years. I wish both men were here so I could thank them for all the hard work they did to support our family.

Coal mining is a noble profession and I appreciate the work coal miners do every day.