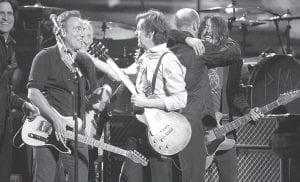 The splintered music world truly coalesces only one night of 365 for the Grammy Awards, and this year was united in the triumph of recovered British soul singer Adele’s trophy haul and the tragedy of Whitney Houston’s death.

Adele swept the major honors of song, record and album of the year Sunday for her lost-love epic “21” and its driving single “Rolling in the Deep.” She picked up her final two awards after making her first public performance in months after being sidelined for throat surgery. Her total of six Grammys matched Beyonce for most ever by a female act.

After seeming almost sheepish in picking up some of the trophies (“This is ridiculous,” she said after winning record of the year), Adele’s tears flowed upon winning best album.

“ This record is inspired by something that is really normal and everyone’s been through it — just a rubbish relationship,” she said. “It’s gone on to do things that I can’t tell you how I feel about them. It’s been the most life-changing year.”

More than 39.9 million viewers flocked to the broadcast, making it the second most-watched Grammys in history, according to preliminary Nielsen Co. figures released Monday. That exceeds last year’s Oscars broadcast, which was seen by 37.6 million viewers, by 50 percent and gave CBS its largest audience since 1984.

Show host LL Cool J’s neat pivot allowed the assembled industry leaders to mourn Houston while enjoying the night’s music. He offered a prayer at the outset for Houston, who died Saturday in a Beverly Hills hotel. Later Jennifer Hudson, under a portrait of the late vocalist, sang a portion of “I Will Always Love You.” Bruno Mars, Alicia Keys, Rihanna and Stevie Wonder all saluted Houston.

Artists have fewer opportunities these days to reach large, diverse audiences and it has made the Grammys an increasingly important venue. Producers take advantage of the star power to pack the night with performances, deemphasizing the actual awards. Sunday’s was a sprawling variety show, occasionally historic.

Bruce Springsteen sang a new populist anthem, “We Take Care of Our Own.” Rihanna dueted with Chris Martin of Coldplay. Katy Perry debuted a shiny blue haircut. Keys and Bonnie Raitt honored Etta James. The Foo Fighters sang “Walk” and later participated in a tribute to new dance artists. Chris Brown hoofed it up a series of steps, although his voice was barely recognizable. Glen Campbell, soon to retire due to Alzheimer’s, appeared in a tribute.

Maroon 5 and Foster the People played Beach Boy songs, then joined the Boys as they reunited for their 50th anniversary. Many believed Brian Wilson and Mike Love, who looked slightly stiff going through “Good Vibrations,” would never appear on stage together again.

Paul McCartney sang a jazzy new song from his album of standards, then was joined by Springsteen, Grohl and Joe Walsh on the Beatles’ “Abbey Road” closing medley.

Then there was the truly unexplainable: Nicki Minaj’s exorcism outing, ending with her levitating above the stage.

Adele was the uniting force. Her album was a critical hit and commercial powerhouse, and it would have been an upset if she hadn’t joined Eric Clapton, the Dixie Chicks, Carole King, Paul Simon and Christoper Cross among artists to sweep the three biggest awards in one night.

While Adele’s vocals are powerful, the singing of best new artist winner Justin Vernon of Bon Iver is often delicate, the music atmospheric. He won a competitive and diverse category with Minaj, The Band Perry, J. Cole and Skrillex. Appearing onstage in an ill-fitting suit jacket, Vernon talked about writing for the inherent reward of writing songs, not for trophies.

It doesn’t mean he wasn’t honored and grateful for the award, he said backstage later.

“At some point I got really nervous,” he said. “Maybe it was because I didn’t feel like I deserved to be here … This is the biggest night in music but it’s also a very small Staples Center, and there’s so much music out there in the world and it’s so hard to feel like it’s collecting the whole thing.”

He gave an onstage shout-out to Eau Claire, Wis., probably a Grammy first.

Grohl shouted “long live rock ‘n’ roll” as producers played LMFAO’s “Party Rock” over the loudspeakers to get him offstage after the Foo Fighters won for best rock performance. He made a plea for musicians to recognize that the human element is what makes their art most important.