Trooper cited for his bravery in standoff 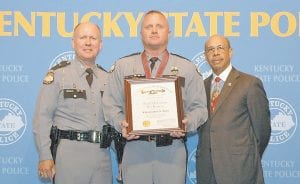 BRAVE OFFICER — Kentucky State Police Trooper First Class Chris Ison (center), son of Jeremiah residents Ronald and Susan Ison, received a Citation for Bravery from KSP Commissioner Rodney Brewer (left) and Justice and Public Safety Cabinet Secretary J. Michael Brown (right) in Frankfort May 14. An 18-year veteran of the agency, Ison is assigned to the Recruitment Branch at KSP headquarters in Frankfort. The citation is a result of a 2012 incident in Pulaski County involving an armed subject holding a hostage. Ison is a 1990 graduate of Letcher High School and 1995 graduate of Morehead State University.

A Letcher County native who is an 18-year veteran with the Kentucky State Police has been honored for the bravery he exhibited during an armed standoff with a man in Pulaski County who had shot and killed his wife.

KSP Trooper First Class Chris Ison, son of Ronald and Susan Ison of Jeremiah, was awarded a “Citation of Bravery” for his actions during the August 2012 standoff that led to the successful capture of Timothy K. Hislope, a Nancy man, now 54, who later pleaded guilty in the shooting death of his wife, 44-year-old Mary Hislope.

Trooper Ison, a 1990 graduate of Letcher High School and 1995 graduate of Morehead State University, was presented the award during a ceremony held in Frankfort on May 14.

Ison was assigned to KSP Post 11 in London at the time of the incident, but has since been promoted to KSP headquarters in Frankfort, where he is assigned to the agency’s Recruitment Branch.

Hislope, then 52, was arrested August 9, 2012, after he shot and killed Mary Gilmore Hislope at their home on Okalona Road in Nancy with police officers just outside the residence. The Commonwealth Journal newspaper of Somerset reported on September 14, 2012, that Hislope was first indicted on one count of murder, one count of kidnapping and three counts of first-degree wanton endangerment.

The newspaper said it obtained the following detailed report of the incident by Kentucky State Police Detective Douglas Boyd, who stated that Trooper Ison, Trooper William Cowan and Pulaski County Sheriff ’s Deputy Steve Molen responded to a report of a disturbance at the Hislopes’ home on August 9, 2012:

“Upon arrival Trooper Ison and (Trooper) Cowan approached the front door of the residence and could hear a female voice yelling for help. As the door opened the (t)roopers observed a female, later identified as Mary Hislope screaming for help with the defendant (Hislope) standing behind her holding a long barreled firearm.

“The door slammed shut and two gun shots were heard. The law enforcement officers retreated to a position of cover.”

The Commonwealth Journal reported that Hislope soon exited the home and raised a shotgun and pointed it in the officers’ direction. Both Ison and Cowan fired their guns at Hislope but didn’t strike him. Hislope then ran back into the house and exited again, this time pointing the gun at Deputy Molen.

“Boyd said in his report that Hislope chased Molen and pointed the shotgun at the deputy several times,” the newspaper reported. “Ison then shot Hislope, and Hislope was airlifted to the UK Medical Center for treatment.”

Continued the Commonwealth Journal report: “The officers entered the home to check on Mary Gilmore after her husband was shot, and Boyd stated in the court document that she was found dead in the residence with two gunshot wounds to her body.”