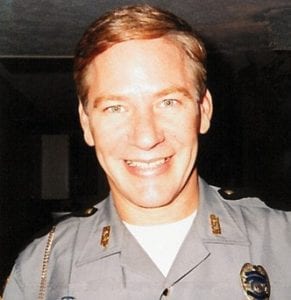 A retired Kentucky State Police trooper will be remembered for his dedication to raising money for KSP outreach programs.

Bennett David Combs, 55, of Ice, died August 23 at his residence after a long illness.

In honor of Combs’s commitment to Trooper Island, KSP Post 13 in Hazard recently established the TPR Bennett David Combs Award. Recipients will be Post 13 employees who champion for the summer camp in similar ways as Combs.

“I’ve never seen anyone that tenacious with wanting to sell raffle tickets,” said KSP Trooper First Class Derek Hall, who is executive security for Gov. Steve Beshear. “He wanted to make sure as many kids as possible from around Letcher County could go to Trooper Island in the summer.”

Combs helped find children he thought would benefit from a week at Dale Hollow Lake near the Cumberland and Clinton County line. The camp is free to children and provides the opportunity for children to spend a week doing recreational activities with troopers. Combs spent many summers helping children develop character-building and confidence skills.

“He was dedicated to making kids’ lives better,” said Hall. “He wanted them to know that he was there for them and he wanted to make the world a better place for them.”

As a non-profit organization, Trooper Island relies on private contributions.

“That was his passion was making sure money was going into Trooper Island,” said Hall. “He would come to court and the attorneys knew they would need to be digging out their checkbooks.”

Shop with a Trooper is another KSP program that Combs supported. Each December, Combs along with other state police, helped underprivileged children pick out new clothes and toys at Whitesburg Walmart.

Combs was a police officer for the Whitesburg Police Department before being sworn in as a state trooper in 1989. During his tenure with the state police, he worked as a street level narcotics investigator and with the marijuana eradication team.

For extraordinary performance of duty, Combs received the KSP Citation for Meritorious Service Award in 1992.

“David was one of the most dedicated troopers I ever worked with,” said Derek Hall. “He was so involved with the community. He wanted everyone to feel safe.”

After he no longer taught DARE classes, Combs continued to visit schools to build up relationships with children in an effort to prevent them from being afraid of police, Hall said.

“He would stop by a different school each day to show kids that troopers were there for them,” said Hall.

After retiring from the state police force, Combs was hired as head of security at Mountain Comprehensive Health Cooperation in Whitesburg. While at MCHC, Combs collected food for KSP’s Cram the Cruiser food drive.

“He just had such a huge heart and wanted to stay involved in the community, said Hall.

Combs ran for the office of Letcher County s-heriff in 2010.

Combs bought a pontoon boat after retiring from the state police. He enjoyed fishing, hunting and riding an all-terrain vehicle in the woods.

Combs was a fan of NASCAR, with his favorite driver being Kevin Harvick. In April, Hall arranged for Combs and his wife Jennifer to go to the Bristol spring race and meet Harvick and Tony Stewart.

“They treated him like royalty,” said Hall. “He had the best time ever. He was on Cloud nNne that day. After that, that is all he talked about. That is a memory I will always have.”

Funeral services were held Aug. 26 at the Premium Baptist Church. Burial followed in the Banks Peaceful Acres at Ice.

The son of Bennett and Linda Brown Combs of Ice, he is also survived by his wife, Jennifer Adams Combs; a daughter, Amber Combs and fiancée David of Winchester; and three sisters, Regina Stivers and husband Robert of Frankfort, Ramona Finchum and husband Michael of Louisville, and Brenda Boggs and husband Stephen of Dryfork.