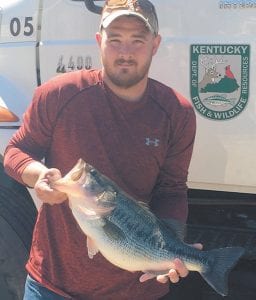 April 4 was a day of firsts for Letcher County fisherman Bobby Webb, local bait shop owner Bill Vanover, and the Kentucky Department of Fish and Wildlife.

For Webb, that Monday marked the first time he had caught an 8 pound 2 ounce largemouth bass from Fishpond Lake at Payne Gap and kept the fish alive for inclusion in the Kentucky Department of Fish and Wildlife’s new “Trophy Bass Propagation Program.”

For Vanover, April 4 was the day he received his official paperwork welcoming his ANA Variety N More bait and tackle shop into the Propagation Program and the first fish he was charged with keeping alive on behalf of the program.

And for the Fish and Wildlife Department, Webb’s big catch marked the first trophy-size bass donated to its hatchery for the new breeding program.

It all sounds confusing, but here’s how it happened:

On April 4, Webb was using a “Rainbow Trout Swimbait” for bait while fishing for largemouth bass at Fishpond Lake when he hooked the eight-pound, twoounce female largemouth. Having recently read about Fish and Wildlife’s new effort to stock bigger bass in Kentucky’s lakes by breeding trophy-size largemouth, Webb contacted department officials to inform them of his catch and ask what he should do with the fish. 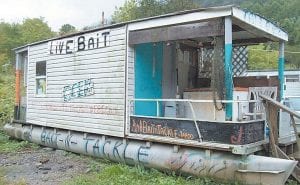 Pictured above is the ANA bait shop at Payne Gap. Below is the Rainbow Trout Swim Bait Bobby Webb used to catch the 8 pound 2 ounce female largemouth bass at Fishpond Lake.

Enter Vanover and his ANA shop, which is located on U.S. 119 at Payne Gap, one mile from the entrance to Fishpond Lake. It was to ANA that Fish and Wildlife officials sent Webb and his trophy bass so Vanover could use his training to keep the fish alive until it could be transported to a state hatchery to be used as brood stock.

Vanover remembers well when Webb arrived with the fish.

“It was new to all of us,” he said. “I’d just gotten the information that day. It was the first fish caught since the state started the program, and I was the first to house a fish for the program.”

Vanover, who has owned and operated ANA for the past 10 years, said he is happy the fish “arrived healthy” the next day to the hatchery to which it was assigned.

Webb said he kept the fish alive and healthy by isolating her in a large tub with aerated water that contained the additive “Better Bait,” a water conditioner bait shops used to keep live minnows in top shape.

“I also cuddled her and talked to her,” Vanover said.

“The goal of the Trophy Bass Propagation Program is to collect trophy-size bass (females over eight pounds and males over six pounds) to be used as brood stock at our state hatcheries,” the Fish and Wildlife Department says. “By pairing male and female largemouth bass which have already shown the ability to grow to larger-than-average size, we hope to produce offspring with the same genetic growth potential. Stocking these offspring across the state could provide anglers a better chance at catching a memorable-size fish or even a new state record.”

Vanover notes that the program will run only until May 31 this year because warmer water temperatures could “stress out” a fish. The program will start up again next October 1.

According to Fish and Wildlife, fish used as brood stock cannot be caught out of state.

The department also says that bait shops such as Vanover’s are important to the program.

The Kentucky Department of Fish and Wildlife Transportation Section is not able to provide immediate pickup of fish once they are caught,” says a department release. “As a result, we need an intermediate holding facility where anglers can take their fish to be held until KDFWR can pick them up. Bait shops have the ability to hold the trophy bass safely in their bait tanks. By providing the fish adequate tank space, aeration and proper temperatures they will remain healthy at these facilities before they make the trip to our hatcheries.”

And what happens with the healthy largemouth bass after the state takes possession?

“Once at the hatchery, trophy bass will be housed in ponds until it is time to spawn,” the department says. “At that time, trophy females and trophy males will be paired together to ensure that enhanced growth potential is transferred from both fish to the offspring. Offspring will be raised to approximately five inches and then stocked throughout the state in the fall, including lakes where the parents came from. From time to time, the hatchery will rotate out trophy brood stock and these fish will be returned to the lakes from which they came.”