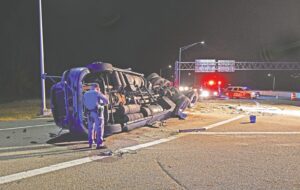 TRUCK WRECK AT JENKINS — The intersection of U.S. 23 and U.S. 119 on Pine Mountain at Jenkins claimed another truck November 9 when a flatbed tractor-trailer carrying sheets of marble and quartz overturned while attempting to turn from northbound U.S. 23 onto U.S. 119. The driver of the truck was not injured in the wreck, which caused traffic congestion along the southbound lane of U.S. 23 for several hours. The truck’s payload was mostly destroyed in the wreck, as most of the sheets of stone, destined to be used as expensive construction materials, were cracked beyond salvage. (Photo by Chris Anderson)