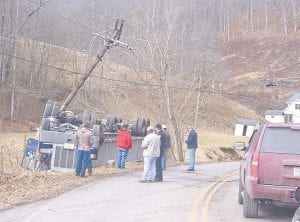 County workers are cleaning up a mess out of Millstone Creek after a tractor-trailer dump truck loaded with garbage overturned beside Millstone Road shortly before noon Tuesday.

The 18-wheeler belonging to Watco LLC of London, a contractor for the county, was traveling from the county garbage transfer station to a landfill at London when it overturned in a curve just before the road crosses the Kentucky River. The collision broke an electric utility pole in two and the truck ended up on its top, the cab resting in a depression beside the roadway.

The driver was not injured, but much of the garbage it was hauling went into Millstone Creek about 100 yards upstream from where it flows into the North Fork of Kentucky. The two streams join about 9 miles upstream from the Whitesburg water intake.

“We’re putting buoys in the watershed, we’re using fences for a dam, we’re putting straw bales down for dams to keep the small stuff out of the creek,” Judge/Executive Jim Ward said.

The Kentucky Division of Water has directed the county not to move the truck until all of those precautions are in place, Ward said. He said workers also have to wait for the Kentucky Power to make the area safe, because of the pole that was broken in the collision.

Ward said the garbage trucks average 20 to 22 tons per load. The truck was full.

Workers were expected to be on the scene most of the night picking up the scattered garbage, Ward said.