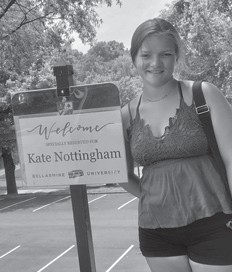 Again, as I start my column, the sun is shining so beautifully. The monitor of my desktop computer blocks the two-lane road in front of the house, and it looks as if I have a continuation of an extended yard across the newly cut hayfield.

In the 48 years I have called this location home, I’ve never once got bored or tired of the scenery in front of my house.

My son Keith Ballard has four birdfeeders on the tree in front of the house, plus two red vintage feeders for the hummingbirds. As I sit on the front porch I see such beautiful birds, a couple of cardinals, bluejays, several birds that are partially red and brown, along with three woodpeckers, and several varieties of downy woodpeckers, which are so tiny.

Of course there are sparrows, and now we are getting too many blackbirds. 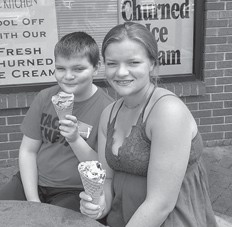 Last Tuesday I lost a friend whom I’ve known since I moved here, which has been 48 years ago. After both of us went through divorce, our paths of life sort of took different turns so we haven’t kept in touch with each other. Then I have my health issues and she also developed health problems.

I neglected all these years without trying to keep in touch except I called her. The way she was having to go back and forth for doctor’s appointments. Again with my health issues and any excuse that I want to make, I waited too long. For so many years we were closer than sisters. 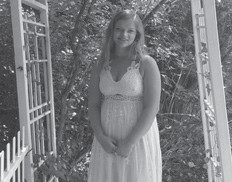 This is the senior picture of Katelyn Nottingham, Rose Ballard’s granddaughter.

My cousin Gracie Widner who lives in New Tazewell Tenn., has been battling stage 4 cancer, but is still hanging on. I decided there was no use waiting until something happened to go look down on her, so I decided to go visit Gracie.

Wednesday morning, Vickie Power and I set out on the adventure to Tennessee, and what an adventure it turned out to be. A semi tried to share my lane with me, scaring me so badly I had to go on the outside of the lane to get away to keep from being sideswiped.

As we continued on our way, I was about six cars back and I saw smoke coming from another semi. It swerved, and all of a sudden small pieces of rubber were flying through the air hitting cars. I realized the semi in front of the semi that I thought the smoke was coming from had a blowout,.

I said to Vicki that I was about ready to get off an exit and head home. Instead, we continued on our journey, which is a four-hour drive one way. We stopped to get gas and grab a bite to eat as we kept moving.

We spent an hour with Gracie, who looked in better shape than me. We had a really good visit, and soon her husband George and their daughter Cathy returned from shopping, so we talked a little more then set out for the return trip to Ohio.

So help me, on the way home another semi ran me completely out of my lane again, except this time I was afraid I was going to lose control of my car. It is a good thing I still have fast reactions. We finally made it home safe and, yes, I thank God.

Friday, we decided to go to Collinsville, which is not too far from Hamilton, Ohio, except it is on such twisted roads that Vickie and I neither one have been on. We listened to some bluegrass music. Marvin Davis was performing with a band. I had a bad episode just as I was getting ready to go, so we were a little late getting there. The place was so packed, there weren’t any seats available it seemed. Finally someone came to ask if we were looking for a seat, the lady was kind enough to go find a seat for us.

It was such a relaxing time just to be able to sit and enjoy listening to the band.

On the way home Vickie and I got to laughing so hard over a couple of things. I finally said to Vickie, she should quit making me laugh, as when I laugh my eyes closed and I couldn’t drive with my eyes closed. Well, we laughed over that so I told her I was going to stop the car and make her sleep in the cornfield overnight.

That started more laughter as Vickie replied that she would call Keith and say, “Your mom put me out, but I don’t know where I am at so you have to find me.”

If someone had heard us, you would have thought we were drinking as we were slaphappy.

I am glad it was Vickie with me and not Daphne Korner as she would have taken me literally. It seems Daphne has developed a fear that I will put her out of the car or else I am going to use the spade I carry in my car.

I’ve carried a spade in the trunk of my car for years in case I find wildflowers in the mountains. I don’t think I have enough strength to dig a hole to bury someone in.

There’s a bluegrass festival I want to attend. Plans may be averted as there are things I have to take care of although I am going to try for at least a one-day trip.

The Osborne Brothers Festival will be Aug. 5-7 at Hyden. Sunrise Ridge and Larry Efaw & Bluegrass Mountaineers will be performing on Saturday, and Jack Adams will be picking that five string for both bands.

The Aug. 14, Carcassonne Community Center square dance is cancelled because of the virus that has flared up again due to so many not taking the vaccine. I wasn’t sure about it until I decided with my health issues and a weak immune system, I felt it best for me. I had no side effects, if it comes to a booster, I will do that too.

Please keep Johnny and Ann Calihan in your prayers. They need them desperately at the present time

Hello Buddy and Bernice, I am hoping to see you when things get settled down.

My granddaughter Katelyn Nottingham has been touring colleges. She loves the one in Louisville, but she has to have a couple of backups just in case something happens that she doesn’t go to West Point.

My grandson Kyle decided to take the trip to Louisville, as Anna drives there occasionally just to get ice cream.

Mike and Marcia Caudill, I was looking forward to a marshmallow roast. You never know where I may show up. I hear there’s a new kind of marshmallow that has chocolate inside.

Hello Tommy Tendel. I hope Price and her husband got to pay you a visit.

Sorry, folks. Until next time.