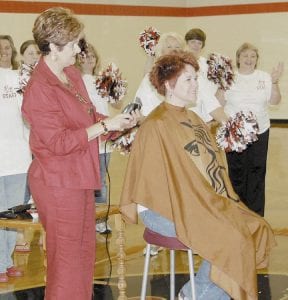 KEEPING A PROMISE – Teachers at Martha Jane Potter Elementary School cheered as Principal Linda Hall was getting ready to have her hair cut short by hairstylist Charlene Mason. Hall promised her students that she would have her head shaved if they did well on the Commonwealth Accountability Testing System (CATS) data. (Photo by Sally Barto)

They did. And she did.

MJP’s students had an average score of 90.8, the highest score obtained by a school in Letcher County,

Hall had her blonde hair colored red on October 3. During a celebration in the school’s gym two days later, Hall’s head was shaved by Charlene Mason, co-owner of the Copper Comb Salon in Mayking. Teachers and students were there to cheer Hall on, but some cringed as Mason used a razor on Hall’s hair.

“She cut her hair because we made high test scores on CATS. It makes us feel good that she actually did it,” said Kiah Mullins, a fifth-grade student at MJP.

Kaitlyn Collier, an eighthgrade student at MJP, didn’t want her principal to have her hair cut short, but she understood why Hall took such a drastic measure.

Collier said Hall had her head shaved “to get us pumped up and want to do good every year.”

Dan Brennan, a band and music teacher at MJP, said Hall found a way to motivate the students to do their best on the statewide tests.

“It’s going to motivate them, give them a little more focus. You have to motivate them in some way that they can see,” Brennan said. “It just goes to show we definitely have a great group of kids here.”

Hall said she is not surprised that the students at MJP did so well, given how hard the students and staff worked preparing for the test.

“The kids gave us 110 percent every day,” Hall said. “The students own those scores.”

Hall said if MJP scores a 100 or above on next year’s CATS testing, teachers will go the extra mile and walk to school from a location to be determined.