Rogers: ‘I will work to protect funding’ for Roxana facility 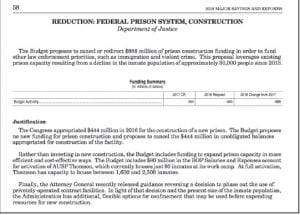 Pictured above is a page contained in President Donald J. Trump’s proposed federal budget for 2018, in which Trump states his “justification” for redirecting the $444 million authorized by former President Barack Obama for a new federal prison at Roxana and using the money “to fund other law enforcement priorities, such as immigration and violent crime. U.S. Rep. Harold “Hal” Rogers says he’ll stop Trump’s proposal.

The budget proposal sent to Congress by President Donald Trump would expressly cancel construction of a prison in Letcher County that is expected to employ up to 400 people, and reallocate the money for “other law enforcement priorities, such as immigration and violent crime.”

Instead, Trump proposes using more private prisons, and putting prisoners that would go here in AUSP Thomson, a former Illinois state prison purchased by the federal government in 2012 to house accused terrorists transferred from Guantanamo Bay. Congress blocked the use of the prison for that purpose, instead reserving it to ease overcrowding elsewhere in the prison system. It was to be in full operation by the end of 2016, and its capacity was considered in the feasibility study for the prison here.

“The budget includes $80 million in the BOP (Bureau of Prison) salaries and expenses account for AUSP Thomson, which currently houses just 93 inmates at its work camp. At full activation, Thomson has capacity to house between 1,600 and 2,500 inmates,” the president’s budget says. “Finally, the Attorney General recently released guidance reversing a decision to phase out the use of privately-operated contract facilities. In light of that decision and the present size of the inmate population, the Administration has additional, flexible options for confinement that may be used before expending resources for new construction.”

A spokeswoman for Congressman Hal Rogers (R, KY-5) said the appropriation for the prison in Letcher County was allocated to the Bureau of Prisons in fiscal year 2016, and a change like that proposed by the president would require separate legislation through the appropriations process. That’s something the congressman does not support.

Rogers, who last week called the budget “draconian,” said the prison is still on track, and he will protect it and other funding for eastern Kentucky.

“As of today, the Letcher County Prison is still on schedule, the funding is available and the BOP’s record of decision is expected to be finalized later this year,” Rogers said in a prepared statement. “Like other programs that have been proposed for reduction or elimination, I will work to protect funding for critical services and economic development opportunities for the people of southern and eastern Kentucky, as we continue the budget process for fiscal year 2018.”

Elwood Cornett, chairman of the Letcher County Planning Commission, which spent 10 years working with Rogers’s office in an attempt to get the prison built here, said he had not been aware that the White House was proposing the cut.

Cornett said he was confident Rogers will prevent it.

“I’m sure he’ll hang right in there, and I appreciate it,” he said.

“What we’re told is the environmental study is complete, and they will soon, early fall, we’re told, issue the final report and then the record of decision,” Cornett said. “The record to decision should be issued by the end of the year.”

The record of decision is the document that would officially begin construction of the prison, if the Bureau of Prisons decides to proceed with construction.

Given the Trump budget, it’s not clear what that decision will be.

Letcher County Judge/ Executive Jim Ward said cutting the money would be bad for the county, especially after working on it for so many years.

“I don’t think they can do that when it’s already been appropriated,” Ward said. “Of course, that’s Trump’s part. It still has to go through Congress.”

Tarence Ray of the Letcher Governance Project said he’s glad Trump wants to cancel the prison, but “I don’t trust his motivation for anything.”

The Letcher Governance Project opposes the prison. Ray said those opposed to the prison have different views on why it would be bad, but said that for him it boils down to a distrust of the figures that show hundreds of jobs and a positive economic impact.

“I guess the commonality between people is that not only will it not create the number of jobs the Bureau of Prisons and Congressman Rogers says it will, but those jobs aren’t great,” Ray said, citing studies that have found divorce and domestic abuse rates increase in communities with prisons.

Opponents also claim that prisons are not a morally acceptable form of economic development, that sewage from such a large facility would pollute the Kentucky River, and say it would have an adverse impact on wildlife in the area.

Those in favor of the prison point to hundreds of jobs, visitors who will spend money here, and note the facility is being built in a secluded part of the county on a reclaimed strip mine at Roxana, where environmental damage would be minimal.

The prison is expected to hire about 400 permanent workers, though many of those would not come from the county initially. Entrylevel federal correctional officers earn $40,511 per year to start, with supervisors earning between $50,000 and $84,000 yearly. Many of those jobs are expected to be filled by BOP employees from outside the area because they have previous experience, but proponents say even the economic impact of people moving in, buying gas, groceries, clothing, and other basic needs makes the project worthwhile.

Ward said that a prison wouldn’t be his first choice for economic development, but “It’s all we’ve got going for us.”