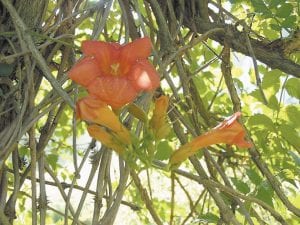 This trumpet vine was found growing wild in the Thornton area of Letcher County this week. (Eagle photo)

I try, only to amuse myself, to get the perfect trumpet vine photograph year in and year out.

August is when I bring the cameras out because I am so obsessed with dark green and orange. So I drive along the fencerows on the back roads here in central Kentucky and mostly look around when the dew is still on in the morning or starting to form when the day is late.

I pull off the road at every wide spot to let impatient people drive on by and I ignore the middle finger that is often flashed my way. I never shoot one back because I hardly ever carry a gun anymore. I got in trouble with the law the last time I shot somebody and it’s not worth the time and trouble to defend yourself. Just let ‘em give you the finger, shoot you and go on about their business is my current credo. A lawyer and a crooked judge are going to have them back on the street in a few days, so why bother. Face it folks. We do live in Kentucky.

I have found that it’s best to be blasé when one’s temper tends to flair. And shooting seldom does much good unless it winds up fried and smothered in deep cream and dash of flour and sprinkled with black pepper.

I do so love squirrel gravy. Even though the season is a few days away, I crave baked red sweet potatoes and a mess of squirrel and I miss Junior and Mollie Helton so much that I hurt all over. They are both gone now, but they practically raised Loretta and me when we moved to Garrard County.

I can tell you for sure that if Junior was alive, he and I would be out of the woods with a limit of squirrels by mid morning on Saturday and Mollie would have the game cooked and gravied and there would be cornbread and green beans by high noon. The kind of eating I want if I ever make it up to heaven. And the kind of company I want to keep.

But the trumpet vine and flowers are not on the fences nor the power pole guy wires like normal for this time of year. At least not in the places I have been. I’ve heard that they are prolifi c alongside Little Stoner Creek near Millersburg in Bourbon County.

But that’s a pretty far piece to drive to make sure that somebody is telling the truth.