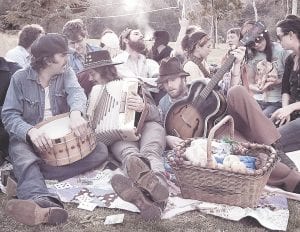 Truth & Salvage Co., who will play here Friday, were formed in Los Angeles in 2007 and later moved to Nashville. Their self-titled debut album was produced by Chris Robinson of The Black Crowes. (Photo by Tony Byrd)

Truth & Salvage Co. are so talented that rock star Chris Robinson of the Black Crowes jumped at the chance to sign them to his record label and produce their first album, an effort so good it has led critics to compare the band’s blend of country and rock music and four-part harmonies to stalwarts such as the Eagles, Crosby, Stills, Nash & Young, Poco and The Band.

Music fans from Letcher and surrounding counties will have the chance to see and hear the band that Rolling Stone magazine critic David Fricke and others have been giving high marks when Truth & Salvage Co. visit Letcher County this Friday night (June 22) to perform a concert at Summit City in Whitesburg.

“How is it having four singers in the band?” is the question most asked of Truth & Salvage Co., often followed by “Where’s the group from again?”

After forming in Los Angeles in 2007, the band quickly caught the attention of The Black Crowes’ Robinson, who signed the act to his label Silver Arrow Records. Before the record was even released, in May 2010, T&S was invited to support the The Black Crowes on tour for the better part of 2009. Rolling Stone awarded their debut effort with a 3-1/2 star review, and USA Today touted the group as being one of the top up and coming acts to see. Countless other shining critical reviews have been bestowed upon them, as well as numerous TV appearances including PBS’s “Sun Studios Sessions” and ABC’s “Jimmy Kimmel Live. ”

The music of Truth & Salvage Co. sits comfortably between two musical genres, country and rock, and is appreciated by staunch lovers of both. Their performance at the 2010 Bonnaroo Festival was widely received, and they are among a short list of groups asked to perform at country music’s Stagecoach Festival two years in a row. Their live show is highly energetic and stacked with their signature four-part harmonies.

The singers effortlessly trade the role of “lead” throughout the set, keeping the show fresh. In addition to The Black Crowes, Truth & Salvage have supported other notable acts The Avett Brothers, Govt Mule, and Lynryd Skynryd and can count sold-out shows at The Ryman Auditorium in Nashville, Red Rocks Amphitheater in Colorado and multiple nights at the Fillmore in San Francisco as some of their most memorable.

According the Smith, the band recently moved its headquarters from L.A. to Nashville, not only because of the better music scene in that town but also because it makes touring easier.

Since touring with The Black Crowes in 2009, the band has been averaging 250 concert performances a year. In a recent interview with the Times-News of Hendersonville, N.C., Smith acknowledged that the band were somewhat spoiled by being on the road with the Crowes.

“The past two years since that tour, we’ve experienced how hard it can be,” Smith told the Times-News. “You know, playing for 300 people in one town, going 500 miles away and playing for six.”

The second album by Truth & Salvage Co. is scheduled to be released soon.

Tickets for Friday night’s show will be available at the door. Information is available by calling 633-2715.