Trying to get jump on Zika preparations with few funds 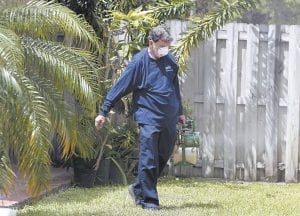 Giraldo Carratala, an inspector with the Miami-Dade County, Florida mosquito control unit, sprays pesticide in the yard of a home in Miami, Fla. (AP Photo)

Beg, borrow and steal: Zika preparation involves a bit of all three as federal, state and local health officials try to get a jump on the mosquito-borne virus while Congress haggles over how much money they really need.

With that financing in limbo, health officials are shifting resources and setting priorities — and not just in states where mosquitoes are starting to buzz. All but six states so far have seen travel-associated cases of Zika.

“Stealing money from myself” is how Dr. Anthony Fauci of the National Institutes of Health describes raiding his agency’s malaria, tuberculosis and influenza programs to fund a Zika vaccine.

He needs more cash by the end of June to keep the vaccine on schedule. And there’s no guarantee those other critical diseases will recoup about $20 million.

“If we don’t get something soon, then we’re going to have a real problem,” Fauci said.

Adding to the stress: What if another health emergency comes along at the same time?

“It’s Zika now, but three months from now, who knows what it might be?” said Dr. Tim Jones, state epidemiologist in Tennessee, where few counties have mosquito eradication efforts.

Yet with funding pleas unanswered, the Centers for Disease Control and Prevention shifted $44 million to Zika from emergency preparedness grants that help state and local health departments with crises from flu outbreaks to hurricanes.

“You have to be careful when you take cuts from core infrastructure for the disease of the day,” Tennessee’s Jones said. “That’s a risky way to do things.”

Zika can cause devastating birth defects and fetal death if pregnant women become infected. Mosquitoes aren’t yet spreading Zika in the continental U.S., but the epidemic in Latin America and the Caribbean has experts predicting small outbreaks here as mosquito season heats up. The more than 540 U.S. cases diagnosed so far involve travel to outbreak areas or sex with infected travelers. The CDC is tracking the outcomes of 157 Zika-infected pregnant women in the U.S., plus another 122 in U.S. territories.

Three months ago, President Barack Obama requested $1.9 billion in emergency funding to fend off Zika. The House and Senate are arguing over how much to grant — and whether the money should come from cuts to other programs — with no final agreement in sight. House Republicans say the administration has padded its Zika request.

The Obama administration already shifted nearly $600 million from funds for Ebola flare-ups in West Africa and other accounts. Late last week, the president said lifetime care for a child born with Zika-caused brain damage may cost up to $10 million.

“Add that up. It doesn’t take a lot of cases for you to get to $1.9 billion. Why wouldn’t we want to make that investment now?” Obama said.

— Florida is no stranger to mosquito-borne outbreaks — it has handled small outbreaks of dengue, carried by the same mosquito as Zika — and is squeezing money out of its usual budget to step up training and traps for areas that need extra help. Officials opened a Zika information hotline that has fielded more than 1,700 calls since February. Miami-Dade County is stepping up enforcement of standing water violations and statewide, residents are being told to screen windows and rid their property of containers that trap rainwater.

Gov. Rick Scott has said the threat of a Zika outbreak should trigger the same response as an approaching hurricane and last week lobbied in Washington for more resources. While Scott hasn’t named a dollar figure, Sen. Marco Rubio, RFla., has supported Obama’s request. “It’s a mistake for Congress to try and deal with Zika on the cheap,” he said late last week.

— New Orleans’ health department has begun sending staffers into neighborhoods to educate residents about Zika and advise them on making their yards less mosquito-friendly — workers also preparing for hurricane season.

“Whether we get money or not, we’re going to do what we got to do,” said health director Charlotte Parent. “But it sure would help to have those extra bodies to get that work done.”

— Virginia took about $700,000 remaining from a federal Ebola grant to hire two mosquito biologists, pay for some testing of mosquitoes and travelers, and educate the public, including plans to hang information on 450,000 doors.