Tubby gets bid after ‘trying’ season 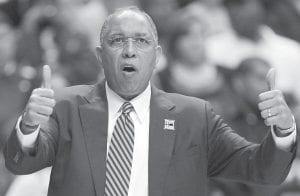 With his father dying before the season, then problems with his team, Tubby Smith says getting Minnesota to the NCAA tournament ranks in achievement with his national title at Kentucky. (AP Photo)

Tubby Smith thought he had seen just about everything in his 19 years of coaching basketball.

Then this year came along.

In his third season at Minnesota, Smith lost his two best recruits to legal entanglements and his starting point guard to an academic suspension. The team that was left endured seven losses by five points or less and was blown out by 28 at Michigan about a week before the Big Ten tournament.

Yet Smith and the Golden Gophers (21-13) orchestrated an improbable run in the conference tournament to earn the 11th seed in the West Region, where they will face sixth-seeded Xavier (26- 7) in the first round in Milwaukee on Friday.

“I haven’t ever had a year like this and I hope I never have one like it again,” Smith told The Associated Press on Tuesday. “Just for the players’ sake. Me, people know what I’m about. I’ve established myself. My credibility is pretty good. What I’m worried about is them. I’m trying to help them become all they can be.”

Smith built Tulsa into a legitimate NCAA tournament threat, restored Georgia’s program to respectability and took Kentucky to a national championship, five SEC titles and six regional semifinals. But his time at Kentucky was often uncomfortable, never quite meeting the lofty expectations of some of college basketball’s most fickle fans after taking the Wildcats to the title in his first season.

So in 2007 he left for Minnesota and took over Gophers program that was ruined by NCAA sanctions and quickly made it competitive again, taking them to the NIT in his first year and the first round of the NCAA tournament last season.

His latest tourney trip may be his most satisfying yet.

“I don’t know that Tubby Smith has ever done a better coaching job,” Minnesota athletic director Joel Maturi said. “Obviously he has won a national championship, so people could argue that. But it has been a challenging year.”

But White left school in February after a series of legal troubles kept him off the court. Mbakwe has been on the shelf all season while an assault case in Miami drags on. He maintains his innocence, and Smith supports him, but the school has made a decision to keep him off the court until the case is resolved.

Also in February, starting point guard Al Nolen was suspended for the remainder of the season for academic reasons.

“That’s been the longest part of the winter. Because you care about guys like Royce and Trevor and Al,” said Smith, whose father died less than a week before the season started. “That’s what life is. Sometimes it throws you a lemon and you’ve got to make lemonade out of it.”

The distractions took their toll. Losses at Indiana and Northwestern and at home to Michigan threatened their chances to make the NCAA tournament.

An 83-55 loss at Michigan stole some of the momentum from a win over Wisconsin in February, but the Gophers responded with a 25-point win over Iowa in the season finale. Then they beat Penn State, Michigan State and Purdue to reach the Big Ten tournament finals and earn that NCAA bid.

Like some of the punishment Smith — the sixth of 16 children raised on a farm in Maryland — received as a youngster, the tough times appear to have hardened this group of Gophers.

“I got my share of paddles and switches and straps and some two-by-twos on my back,” Smith said. “It was the best thing that happened to me. This group, they’ve handled it as well as anybody.”

“We talk about the ‘Tubby stare,’” Maturi said, referring to Smith’s famous glare of fury at a player after a mistake. “Really it’s the Tubby focus. He just does not lose that ultimate focus. He refuses to give up on the ultimate goal, on this team, on this staff, his style and his convictions. And here we are.”

After all the adversity, senior co-captain Damian Johnson said the Gophers feel ready for anything the Musketeers will throw at them.

“We feel like we’re a team that can handle any situation right now,” Johnson said.

Smith said the loss of his father and a nephew, who was stabbed to death on a college campus in 2008, has given him a new outlook that has helped this team come together at the right time.

“We’ve tried to be more positive and tried to really focus on the kids,” Smith said. “Sometimes those negative things can seep into you and you don’t realize it’s coming out. And it’s the way the players are receiving it.”