Tumor shrinks, but boy faces long road ahead in battle with leukemia 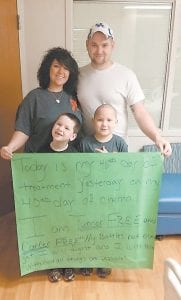 An eight-year-old Mayking boy diagnosed in January with childhood acute lymphoblastic leukemia (ALL) recently found out that he is in cancer remission.

Luke Polly, a son of Jonathan and Abby Polly, has been in Memphis, Tenn., receiving chemotherapy treatments at St. Jude Children’s Research Hospital since Jan. 29.

On March 12 — Luke’s 45th day in Memphis — the Pollys learned that the tumor on Luke’s lung is gone and that Luke is in remission.

“We are so not out of this battle at all,” said Abby Polly, Luke’s mother. “We still have a long way to go.”

Luke, a second grader at Martha Jane Potter Elementary School, has 168 weeks left of chemotherapy, Abby Polly said. Luke and his family will spend the next three years traveling to Niswonger Children’s Hospital in Johnson City, Tenn., three times a week and to Memphis twice a month.

“The next six months are critical to Luke,” said Abby Polly. “He feels okay. His joints hurt him a lot. He’s not our active little boy at all.” 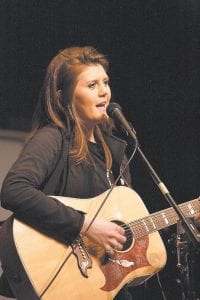 Taylyn Combs is one of several local musicians who has helped raise funds for the family of Luke Polly, the eightyear old boy who is improving, but still faces a long battle with leukemia. (Photo by Thomas Biggs)

Luke enjoys fishing, swimming, playing outside and getting dirty. He likes to ride all-terrain vehicles and motorcycles as well as playing football and video games.

Tuesday marked Luke’s 50th day in Memphis. His mother said that eight of those have been days without chemotherapy. On days that Luke has felt well, the Pollys played board games and watched movies on television.

Admission to the Memphis Zoo, carriage rides and other area attractions are free to St. Jude’s patients and their families. The Pollys have visited the zoo three times and have gone to America’s Incredible Pizza Company, which has games similar to Gatti’s Pizza in Pikeville.

“There’s a lot of stuff to do to keep kids occupied,” she said.

Luke began the second phase of chemotherapy treatments on March 11 by receiving his first dose of Methotrexate (MTX). When the chemotherapy level in Luke’s body is 0.0, Abby Polly said he will be discharged from the hospital and will travel home to Mayking with his parents and six-year-old brother Dylan.

“The body has to release the chemo and his chemo level is too high,” said Abby Polly, who is anticipating that Luke will get to go home in the next few days.

Luke’s hair was beginning to fall out so Luke shaved the head of his father Jonathan and he shaved Luke’s head on March 9. Abby Polly had six inches of her hair cut in preparation for shaving her head, but Luke wouldn’t let her.

Some male family members back in Letcher County have shaved their heads in support of Luke.

As a precaution because of Luke’s weakened immune system, while the Pollys are in Memphis, members of Abby Polly’s large extended family have spent the last three weeks thoroughly cleaning the Polly home. Abby Polly’s aunts have washed every dish in the cabinet and washed all of their clothes.

“Everything had to be cleaned — stuffed animals, couches,” she said. “We are just lucky enough to have come together.”

Family members pulled up carpet and laid down hardwood floors.

When the Pollys go home to Mayking, Luke won’t be able to be around large crowds. Only close family and friends are asked to visit Luke at his home. He can’t have personal contact.

Abby Polly got permission from Luke’s doctors to be able to take him to MJP to see his friends for about 30 minutes after he is released from the hospital. Doctors told Luke to wear a mask and gloves when he visits his school.

Abby Polly said that she and her family are amazed by the outpouring of support her family has received since her son was diagnosed with leukemia on Jan. 28.

“We appreciate all the support everyone has given Luke,” said Abby Polly. “It means a lot to us.”

Bake sales, benefit concerts and other fundraisers have been organized by family and friends in the community.

“This has allowed us to stay together,” she said.

Luke has received 28 care packages and lots of cards. Abby Polly is amazed that strangers have sent gifts from North Carolina, Indiana and Ohio.

“We’ve even gotten one from an inmate,” said Abby Polly. “They are really sweet. We’ve gotten so many Xbox games, iTunes cards and Walmart cards.”

Donations can be made at Whitaker Bank in Whitesburg. Donate online at www.gofundme.com/lukepolly.