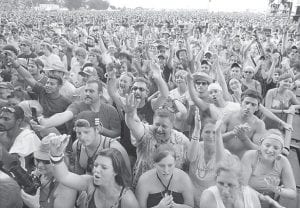 Fans of all ages cheered during a B.B. King concert at the Bonnaroo music festival in Manchester, Tenn., on June 14. (AP Photo/Mark Humphrey)

Destination festivals are a universe unto their own where the real world is left in the parking lot. But at this year’s Bonnaroo Music & Arts Festival, the outside world and its problems – politics, high gas prices – were always lurking just offstage, and sometimes were front and center.

Cheering loudly, most in the crowd agreed.

Vedder spoke repeatedly about the need for change and about the Iraq War, occasionally reprimanding himself for not staying positive. Pearl Jam’s performance was undoubtedly a high point for this year’s Bonnaroo, highlighted by a singalong version of “Better Man” during which the vast audience held lighters aloft and a near-full moon shone from behind the stage.

The elements can often be a major factor at Bonnaroo – held annually on a 700-acre site south of Nashville – but temperatures were bearable. Hard rain fell for a time late Friday night, making My Morning Jacket’s exuberant 3-hour midnight concert a memorably soaked one. Sunday, the final day of the four-day fest, was beautifully clear and was further warmed by Alison Krauss and Robert Plant, who exuded contentment in the unlikely (and hugely popular) late chapter in his career.

On the same stage Friday night, Chris Rock played to one of the largest rooms a comedian will ever work. As many as 60,000 of the estimated 80,000 in attendance watched him command the crowd with a relentless pace and sharp observations.

Rock, of course, had barbs for the presumed presidential nominees, John McCain and Barack Obama – who he said has a name so black-sounding that he could be “the bass player for the Commodores.”

The comedian wondered how gas prices could be so high considering the Iraq war: “Let me tell you something. If I invade IHOP, pancakes are going to be cheaper in my house.”

Rock also called himself an “antidepressant” and other acts similarly hoped to alleviate worries.

“Do you feel good?” Metallica lead singer James Hetfield asked the crowd. “Metallica is here to make you feel better.”

Metallica performed a unique double bill following Rock, who introduced the heavy metal band. Metallica’s testosterone-fueled set was flawless, but the band had to work to win over the crowd, which at Bonnaroo has traditionally been on the hippie side. When Hetfield asked who was attending their first Metallica concert, the crowd was a sea of raised hands.

The festival’s biggest glitch was the delayed concert by Kanye West. The rapper’s performance came almost two hours late, beginning at 4:25 a.m. and angering the crowd who booed and pelted the empty stage with glow sticks. The delay was due to problems in setting up West’s elaborate stage for his galactic concept concert.

Some at the festival saw a greater willingness to be politically involved in this election year. Disco Biscuits bassist Marc Brownstein, who co-founded the nonprofit Headcount to register votes at music festivals and concerts, said he saw a change.

“The fans are significantly more receptive to the idea of stopping and taking the time to talk about voter registration right now,” said Brownstein, speaking on his band’s tour bus before playing a late set Friday night. “I think it’s changing and it’s changing rapidly because we’re able to use the platform of music to get people thinking about things outside of music.”

Bonnaroo, which was created in 2002 by Superfly Productions and AC Entertainment as then a primarily jam band event, is welcoming of organizations like Headcount and the numerous environmental groups with booths on festival grounds.

Arguably the country’s biggest festival, Bonnaroo boasts over 150 acts, including many comedians. There were myriad sights and sounds to experience beginning with the Thursday night performance by the hip new Afro pop-influenced Vampire Weekend and concluding Sunday with the jamming Widespread Panic.

The 82-year-old B.B. King wowed with the vigor of his performance despite being seated throughout. Sharon Jones and the Dap-Kings upheld their reputation as a terrific live act with their funky soul revival, (said Jones: “I wear this dress so I can shake it”). Sigur Ros’s famed live show lacked something without their usual light display, but the Icelandic band’s new material drew great applause (and a few ecstatic tears) in the wee hours of Saturday night.

And that still leaves out excellent sets from, among many others, Rilo Kiley, the Swell Season, Death Cab for Cutie, Jack Johnson, Jose Gonzalez, and the Raconteurs.