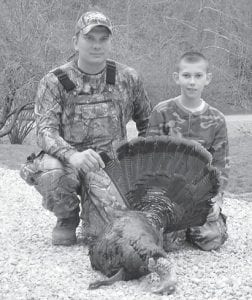 FIRST TURKEY — Owen Gibson II killed his first turkey during the recent Youth Hunt with a friend, Steve Dicks. Owen is the son of Owen and Nikki Gibson, and a grandson of Leonard and Kay Boggs, all of Cowan. He is also a grandson of Codell and Debbie Gibson of Craft’s Colly and Carlene and Kenneth Oliver of Paris.

Some 90,000 hunters are expected to turkey hunt this spring. The number of two-year-old gobblers is at record levels, and biologists predict a good season this year. During the recently concluded youth-only turkey weekend, April 3-4, hunters took more than 1,800 gobblers.

Details of hunting regulations are listed in the spring hunting guide, available wherever hunting licenses are sold or online at fw.ky.gov. Some basics hunters need to know before going afield include:

• Licenses needed: Adult hunters who live in Kentucky must have a hunting license ($20) and a spring turkey permit ($30). Residents hunting on their own farm do not need a license or permit, although they must abide by all state harvest regulations. Seniors 65 and older are eligible for a $5 license, which includes the license and permit. Hunters under 12 years old do not need a license or permit. Hunters from ages 12-15 must have a youth hunting license and a youth hunting turkey permit.

• Where to get licenses: Obtainable wherever sporting goods are sold, over the telephone by calling toll-free 1-877-598-2401 or online at fw.ky.gov, the Web site of the Kentucky Department of Fish and Wildlife Resources.

• Turkey zones: Kentucky is open statewide. There are no zones for turkey hunting.

• Baiting: Prohibited for any wildlife in hunting areas through May 31. Food plots planted for game animals are legal.

• Type of turkey that hunters can take: Hunters may take any bird with a beard on its chest. Hunters cannot take a hen that does not have a beard.

• Season limits: Hunters may take one bird a day, and a total of two during the season.

• Safety: Never wear red, blue or white while turkey hunting, as these are the colors of a gobbler. Always be sure of your target before shooting. Alert other hunters to your presence by yelling at them rather than using a sudden movement, such as waving. Wear an orange hat or patch of orange on your clothes if you are leaving the woods with a turkey over your shoulder.