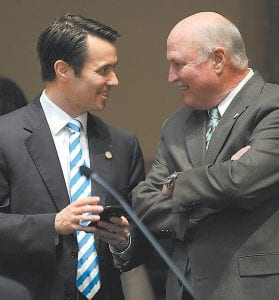 BACK IN SESSION — State Senators Johnny Ray Turner (right) and Morgan McGarvey shared a laugh on the floor of the Kentucky Senate.

Kentucky State Senator Johnny Ray Turner says Democrats and Republicans can work together in Frankfort, citing as an example a new resolution introduced into the Senate that, if passed, would oppose the state of Virginia’s recent decision to stop recognizing concealed handgun permits held by residents of Kentucky and several other states.

The proposed resolution comes in response to Virginia Attorney General Mark Herring’s announcement in December that beginning February 1, concealed handgun permits held by residents of Kentucky will no longer be valid in Virginia because gun laws here and in 24 states fail to meet Virginia’s tougher requirements for concealed carry permits.

“While you are here, you are subject to the commonwealth’s gun laws,” Herring said during his December 21 announcement.

Herring said Virginia is revoking its “reciprocity agreement” with Kentucky and the other states because their concealed weapon laws don’t meet Virginia’s standards. Those states hand out permits to people who are barred under the Virginia law, like fugitives, convicted stalkers and drug dealers, which undermines the state’s law and puts residents at risk, he said.

Visitors to Virginia, which borders Letcher County and attracts many shoppers from here, will still be able to carry a handgun into the state, but the weapon must be displayed openly. Kentucky residents with concealed carry permits may also have the option of obtaining a nonresident concealed handgun from Virginia if they meet the requirements set forth by that state’s law.

In addition to Turner, whose 29th Senatorial District also includes Harlan, Knott and Floyd counties, five other Democrats and 14 Republicans have signed on as sponsors of the joint resolution, which was introduced into the Senate or January 6 and is now in the hands of that body’s Committee on Veterans, Military Affairs, and Public Protection.

The two-page resolution urges “the governor of Virginia and the Virginia attorney general to restore reciprocal recognition of concealed carry weapons licenses from Kentucky,” saying their failure to do so would “put the lives and property of Kentucky’s lawabiding citizens in danger.”

“Tens of thousands of Kentuckians peacefully travel to Virginia for employment, commerce, tourism, and a variety of other pursuits,” the resolution says. “… The failure to recognize a reciprocal agreement with Kentucky means that the citizens of Virginia who travel to Kentucky are equally endangered by no longer having the ability to legally carry concealed weapons while in Kentucky.”

“Tens of thousands of citizens of each state are being denied their rights and the tools with which to protect all people,” the resolution adds.

Herring, the Virginia attorney general, said the only states that have tough enough laws to maintain their reciprocity agreement with Virginia are Michigan, Oklahoma, Texas, Utah and West Virginia.

“Evenly, consistently and fairly enforcing Virginia’s concealed handgun permit law, as we are now doing, means that it will be more difficult for potentially dangerous individuals to conceal their handguns here in Virginia and that will make Virginians safer, especially Virginian law enforcement,” Herring said.

Turner said he expects the joint resolution to be “vigorously debated” on its way through the Senate, after which it will be taken up by the state House of Representatives.