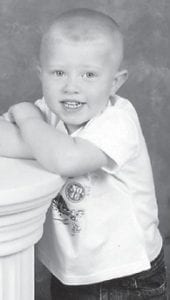 TURNING FOUR — Jeremiah Worren Edward Hurt will celebrate his fourth birthday on Nov. 13 at the Blackey Missionary Baptist Church. His birthday will be Nov. 14. He is the son of Amanda Rogers of Blackey and George Hurt of Leatherwood. His grandparents are Louada Rogers of Hazard, Earshel ‘Pancho’ and Darelene Hurt of Blackey, Danny and Sandy Rogers of Hallie, and the late Wilma Dale Gilliam Hurt of Leatherwood. He is a student at LKLP Mountain Heritage Head Start and enjoys the outdoors, water activities, guns, and riding toys.