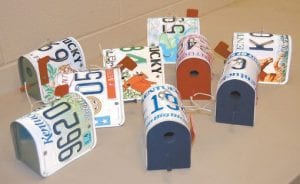 This assortment of birdhouses made in part with old license plates is on display in the offices of Letcher County Clerk Winston Meade. The houses were built by Meade’s father-in-law, Arnold Lee Watson, to help raise money for the Veterans Program Trust Fund. (Eagle photo)

Arnold Lee Watson has been building birdhouses using old license plates as a roof, then selling them to raise money for the Veterans Program Trust Fund on behalf of the Letcher County Clerk’s Office.

Watson, of McRoberts, is the father in-law of Letcher County Clerk Winston Meade. He decided to begin building the unique and colorful birdhouses after Meade attended a meeting of the Kentucky County Clerks Association and brought home two similar birdhouses that were made elsewhere.

Watson has made about 50 birdhouses so far and the clerk’s office has sold 19, with proceeds going to the Help a Veteran Everyday, or H.A.V.E. program.

Meade said Watson, who has three brothers who are veterans, donates the materials and time used to make the birdhouses.

“He wanted to do something to help veterans and this is his way to help,” said Meade. 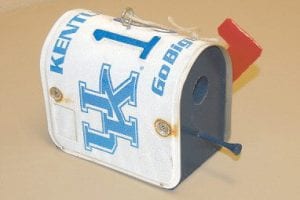 HELPING VETERANS — Pictured above is a University of Kentucky license plate birdhouse made by Arnold Lee Watson, the father-in-law of Letcher County Clerk Winston Meade. The birdhouses are for sell in the clerk’s office for $20 each. All proceeds go to Help a Veteran Everyday, or H.A.V.E. program.

The birdhouses, which are being sold for $20 each, are made to resemble a mailbox and have a painted wooden base with an old license plate draped over the top.

Depending on the specialty license plates obtained by Meade, the roofs of the birdhouses have different themes including nature, colleges, and volunteer fire fighting. Meade said the most popular style of birdhouse is made using an old University of Kentucky license plate.

Meade has traveled to several counties looking for unique plates to use for making more birdhouses. People can donate old plates to the clerk’s office for the birdhouse project.

Selling license plate birdhouses is the latest effort by Meade’s office to raise money for the H.A.V.E. program. All money raised through H.A.V.E., created by the Kentucky County Clerk’s Association, goes to the Kentucky Veterans Program Trust Fund. The trust fund, established by the Kentucky General Assembly in 1988, helps support projects and programs for Kentucky veterans. 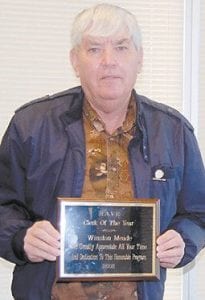 Pictured to the left is Meade, who was named 2008 clerk of the year for the H.A.V.E. program.

The Homeless Veterans Transitional Treatment program in Lexington was established with funds from the trust. Money from the fund was also used to purchase 10 vans for the Disabled American Veterans organization, to purchase land for a state veterans cemetery, and to enhance state veterans’ nursing homes.

“Every penny is spent on the veterans,” said Meade. “None of it is spent on salaries or anything like that.”

Meade was named 2008 clerk of the year for the H.A.V.E. program for his efforts of raising money for the program.

“This county has raised more money for the H.A.V.E. fund than any other county in the state,” said Meade. “I was real honored to receive this. I give the girls in the office the credit for the funds they have raised for H.A.V.E.

The clerk’s office hosted a golf scramble at Raven Rock Golf Course in September in which funds raised from the scramble were used to finance a Christmas party for the East Kentucky Veterans’ Center in Hazard. During that time the center served seven residents from Letcher County.

When people purchase the veterans’ specialty license plate, $5 of the cost of the plate goes into the H.A.V.E. fund. The clerk’s office also welcomes cash donations to H.A.V.E.

“This is one way to give back and to thank (veterans) for what they have done for us,” said Meade.