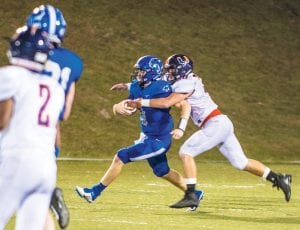 Letcher Central’s Carson Adams moves the ball upfield before getting wrapped up by the defense last Friday night in the Cougars’ home opener against Union High School from Big Stone Gap, Virginia. A long lightning and weather delay just before halftime pushed the finish of the game past midnight, and the Cougars saw their home opener and homecoming spoiled by a 42-20 loss. The Cougars are back on the road this week as they travel to Pike Central to take on the Hawks. (Photo by Chris Anderson)

The Letcher County Central Cougars will travel to Pike County Central High School in Pikeville Friday night with hopes of getting back on the winning track.

The Cougars are coming off a 42-20 loss to visiting Union High School of Big Stone Gap, Virginia in a game that was much closer than the final score indicates.

The Cougars got the ball first in last week’s contest and immediately had to punt after they couldn’t move the football. Then, LCC’s Jepatha Griffith forced a fumble on the first Union offensive play and Sam Mullins recovered for the Cougars. The offense never got a first down and turned the ball over again on downs.

The Bears capped a nine-play, 77-yard drive with a touchdown on a two-yard run by Bryce Guerrant followed by a successful twopoint conversion for an 8-0 lead.

The Cougars again went three and out, after which Union capitalized on the good field position with a 29-yard touchdown reception by Daemei Lester to make it 14-0 in favor of Union.

On the next LCC offensive play, quarterback Carson Adams connected with Hunter Campbell on a seam route for a 68-yard touchdown. The extra point was no good but LCC had cut the lead to 14-6 late in the first quarter. It was one of three touchdowns Campbell would score.

After a Union turnover deep in its own territory, LCC had a fourth-and-goal from the twoyard line. The Cougars were trying to push the ball carrier across the goal line, but the ball was fumbled and the Bears recovered in the end zone for a touchback.

After consecutive punts, Guerrant broke away for a 61-yard touchdown run to give the Bears a 21-6 lead after the extra point sailed through the uprights.

Adams gained eight yards on a quarterback keeper to start the LCC drive. Then Hayden Brashear picked up 16 yards on a fullback dive before Alex Blair took a reverse for a 19-yard gain to set up a five-yard touchdown run by Campbell to cut the lead to 21-12.

Union scored on a two-yard rush to take a 28-12 lead into halftime. The Bears got the ball to start the second half and big runs of 40 and 25 yards led to a two-yard touchdown run by Guerrant. The extra point increased the lead to 35-12.

Blair had a 31-yard kickoff return to give LCC good field position. On third-and-eight, Campbell caught a swing pass from Adams for a nine-yard gain and a first down. Three plays later, Campbell scored on a two-yard touchdown run up the middle. Adams scrambled to the right and dove into end zone for the two-point conversion to make the score 35-20.

Union then moved the ball deep into LCC territory but defensive back Koby Barnette intercepted a pass in the end zone for a touchback.

On third-and-seven, Adams completed a pass to senior Thomas Whitaker for a first down. On the last play of the third quarter, Campbell had a long run deep into Union territory. On fourth down and four at the Bear 10-yard line, the LCC pitch play was stuffed by the defense for a turnover on downs. Union then used a 12-play scoring drive capped off by a 25- yard touchdown run by Guerrant to eat up the rest of the clock and win by a score of 42-20.

The score was not indicative of how close the game was. A fumble going into the end zone and two red zone turnovers on downs were the Cougars undoing.

Jepatha Griffith, who had 11 tackles and a fumble recovery, led the LCC defense. Jackson Meade had eight tackles and Hayden King had seven tackles for the Cougars.

Kickoff for Friday’s game at Pike Central is set for 7:30 p.m.