'Outside In' is Hollywood tale by Courtney Thorne-Smith 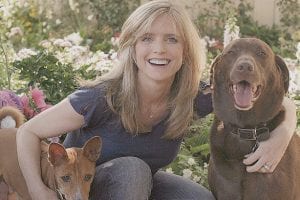 Actress Courtney Thorne-Smith is seen posing with her dogs, Ed, left, and Norman at home recently in Los Angeles. Thorne-Smith, whose acting career includes her breakout role in “Melrose Place” and her current gig opposite Jim Belushi in the ABC sitcom “According to Jim,” has written a debut novel “Outside In,” whose characters include a vulnerable TV star. (AP Photo/Courtesy the Zizo Group)

In Courtney Thorne-Smith’s debut novel, “Outside In,” the characters include a vulnerable TV star, a philandering husband and a callous mom. None of them is plucked directly from her own life, the actress says firmly.

“I know people are going to think it’s autobiographical,” Thorne-Smith said. But the cad is not her ex-husband and the dreadful mother is “so comically not my mom. My mom would crawl over hot coals to have lunch with me.”

The actress, whose career includes her breakout role in “Melrose Place” and her current gig opposite Jim Belushi in the ABC sitcom “According to Jim,” says she deliberately avoided writing about herself.

“I got out of autobiography because my story is, I was famous, it was hard for me, I got into therapy. I had trouble with food, I got a nutritionist,” she said, referring to her “Ally McBeal” days of obsessive thinness. “There’s no story there.”

Instead, she wanted to create an actress adrift and alone, someone who didn’t have the kind of supportive family and friends who Thorne-Smith says got her through rough patches.

“There’s so many young women today who look so lost. And I feel like, of course they’re lost. They have no one around them to give them real, authentic reflection. Nowhere they can go and say, ‘I’m having a hard day,’ where someone’s not going to say, ‘Well, you have to work anyway because you’re paying my bills.'”

Although Thorne-Smith doesn’t name names, it’s easy to conjure up sad images of Lindsay Lohan or Britney Spears as she talks.

“You need someone to say, ‘I’m sorry. That’s too bad.’ It seems so simple but it’s very isolating, especially at a young age, to be famous,” Thorne-Smith told The Associated Press.

Her own life seems well-ordered. She’s awaiting not only the September publication of her novel but the arrival of her first child this winter, with new husband Roger Fishman. She’s also fitting in a seventh year of “According to Jim,” scheduled to return at midseason.

Looking barely older than when she played Alison Parker on “Melrose Place” in the 1990s, the actress with the wide-eyed gaze and ready, throaty laugh clearly is relishing her circumstances – especially the prospect of parenthood.

She was lucky, at age 39, to meet “my guy,” the man with whom she wanted to have a family. She and Fishman, 46, who’s in marketing, married this year on New Year’s Day.

“It’s such an amazing moment for both of us, because we both sort of had to say, ‘I don’t know if this is going to happen for me.’ The fact it’s happening is just astounding,” she said.

When it comes to her other baby, “Outside In” (Broadway Books), there’s no getting around the fact that it’s based in Thorne- Smith’s world even if she scrupulously avoids attaching real celebrity faces to the characters.

The tone is wryly comedic, but also touching – and it’s chaste. Sex just didn’t figure into her heroine’s journey, Thorne- Smith said, but the sequel already under way could be different.

The star of “Outside In” is Kate, an insecure actress who’s got a tenuous grip on her self-esteem, career and marriage to Hamilton, a Svengali who’s also her manager. Sapphire Rose is the nemesis who’s threatening Kate, both personally and professionally.

Isolated Kate has few resources to muster: At her lowest emotional point, Kate’s mom tries to use her celebrity daughter as a party auction item. Kate does find solace in the friendship of makeup artist Paige, who dispenses support along with coats of lipstick.

They may be fictional, but the characters embody Hollywood misbehavior Thorne-Smith has encountered.

For example, Sapphire Rose, a narcissistic diva, is “an exaggerated composite of every frustration I’ve ever had on set,” she said.

“I’ve had people acting out in what I considered spoiled behavior. I’ve waited on set hours and hours for a variety of people for a variety of reasons, and it makes me crazy,” she said. “Unfortunately, the problem in Hollywood is (such conduct) is supported and allowed to go on.”

Thorne-Smith seems to have come to grips with the downside of her business – and extracted a measure of satisfaction by targeting the guilty parties in “Outside In.”

But it’s Kate and Paige who are at the heart of the book, Thorne-Smith said.

“It’s really a story about female friendship and how that first connection helped her to find herself,” she says of Kate.

There’s another message Thorne-Smith would like to convey, one stemming from her own struggle to overcome her doubts about being a writer.

She’d kept journals for years and briefly turned out articles on beauty and health for magazines including Allure and Self, but those were assignments that failed to reflect her view. She realized fiction was the right vehicle and finally pursued it with encouragement from her husband and close gal pals.

Getting published wasn’t the point; investing herself in the work was, she said.