TV had some big moments during past year 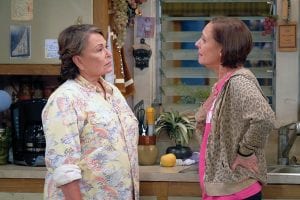 Roseanne Barr, left, and Laurie Metcalf appear in a scene from the comedy series “Roseanne.” The comedy about the blue-collar Conner family and its brassy matriarch returned in March as a success for ABC and Roseanne Barr. The magic evaporated in May after Barr’s racist slam of Obama adviser Valerie Jarrett. ABC called her tweet “abhorrent” and canceled the series. (Adam Rose/ABC via AP)

It was a remarkably dramatic year on television, with much of it unscripted.

While prime-series including “This Is Us” and “Atlanta” reached notable emotional and provocative highs, TV impressively fulfilled its role as witness to gripping real-life events.

We had the chance to see it all unfold: today’s barbed politics in unlikely settings; a woman essentially saying MeToo to U.S. senators; the suitably extravagant goodbye to an American queen.

Here are some of the moments with staying power:

Winfrey’s rousing call for social justice in the name of the MeToo movement drew wild cheers in the ballroom at the Golden Globes in January and reverberated across the land. Pundits and Oprahwhisperers proclaimed it a first step toward a presidential run, and #oprah2020 trended. It would be a true Hollywood script: an entertainment mogul challenges a reality-show host for the Oval Office. Oprah said no way; the chatter continues.

The time-shifting series revealed in season one that Jack Pearson (Milo Ventimiglia) was destined to die young, leaving a grieving widow, his unmoored children and viewers tortured by the mystery of what did him in. In episodes airing in January and February, we learned it was a faulty slow-cooker and Jack’s boundless sense of duty. America’s tears flowed even as we turned a fearful eye toward our kitchen appliances.

THE RISE AND FALL OF “ROSEANNE”

Three decades after it ended, the comedy about the blue-collar Conner family and its brassy matriarch returned in March as a success for ABC and Roseanne Barr. The revival hit the sweet — or sour — spot of politics and culture today, with a polarizing star whose character mirrored her backing for President Donald Trump. The magic evaporated in May after Barr’s racist slam of Obama adviser Valerie Jarrett. ABC called her tweet “abhorrent” and canceled the series.

Donald Glover, whose reimagination of the TV comedy challenges viewers, tested them with a truly unsettling character, Teddy Perkins, depicted in masklike whiteface (an uncredited performance by Glover, though it remains a mystery who made Teddy’s cameo appearance at the Emmys). Was the episode in April a riff on the sad life of a Michael Jackson-like celebrity? A slap at the insulting blackface used by white entertainers past? We’re still mulling.

The Australian standup was little known in America when her Netflix special “Hannah Gadsby: Nanette” arrived in June, dissecting culture and the very artform she practices. She was heralded as a major new voice and her work was labeled “transformative” and “game changing,” the kind of awe and admiration granted to enduring comedy greats such as Richard Pryor, George Carlin and Dave Chappelle.

The Queen of Soul’s memorial was one for the ages, with preachers,

Motown and gospel legends and political and religious leaders offering speeches and songs in praise of Franklin’s life, artistry and activism on behalf of African- Americans and women. Stevie Wonder sang, and so did Smokey Robinson and Chaka Khan and Shirley Caesar and Gladys Knight and Ariana Grande and … plenty of others, since the service ran eight hours. Franklin’s voice was stilled, but her spirit resonated.

In his “Just Do It” TV spot for Nike that marked the campaign’s 30th anniversary in September, the sidelined-by-kneeling NFL quarterback somberly challenged viewers to “believe in something, even if it means sacrificing everything.” Some responded with anger, cutting or burning Nike gear and calling for boycotts. President Donald Trump slammed the company’s move, while LeBron James defended it, saying he stands for those who believe in change.

In schools, at work, in coffee shops, Americans watched on phones, laptops and any available screen as U.S. Supreme Court appointee Brett Kavanaugh and sexual-misconduct accuser Christine Blasey Ford made their emotional cases in September to a Senate committee. The hearing reinforced the extraordinary power of TV to present an event as it unfolds, allowing us to judge it for ourselves before it’s filtered and packaged for consumption and “Saturday Night Live” satire.

Megyn Kelly argued the case for dressing up in Halloween blackface, telling her morning show viewers it was OK when she was a kid if it was an impersonation. The backlash was immediate, with critics accusing Kelly of ignoring the ugly history of white entertainers applying blackface to demean African-Americans. The former Fox News Channel host offered a tearful on-air apology, but NBC fired her in October from the 9 a.m. “Today” slot after just a year.

Funeral services were for mourning and messages. At Sen. John McCain’s September memorial, daughter Meghan issued a sharp rebuke to his nemesis President Donald Trump, who was left off the invitation list. “The America of John McCain has no need to be made great again because America was always great,” she said. President George H.W. Bush’s memorial in December was kinder and gentler and Trump attended, but he was the first sitting president in 45 years not asked to eulogize a predecessor.

Lynn Elber is a national television columnist for The AP.