TV not taking summer off 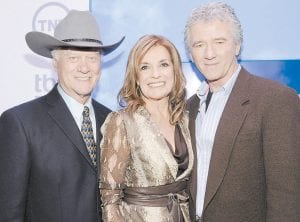 To make the remote control as key to the season as sunblock and barbecue, cable and broadcasting are pumping out a variety of shows and specials, both scripted and reality. And NBC’s “America’s Got Talent” and Howard Stern are not the standard-bearers: Welcome back to TV, Aaron (“The West Wing”) Sorkin!

Here are highlights of what’s on tap as the temperature rises:

“Hemingway & Gellhorn,” HBO, debuted May 28. Clive Owen and Nicole Kidman star as the great writer and the strong-willed war correspondent who proved his match.

“Breaking Pointe,” CW, May 31. A peek at the demanding life of dancers with the respected Ballet West in Salt Lake City.

“The Choice,” Fox, June 7. A shameless takeoff on NBC’s “The Voice,” this contest gives celebrities including Dean Cain and Joe Jonas the chance to win a blind date.

“Dallas,” TNT, June 13. J.R. Ewing (Larry Hagman), the great white-collar villain of his day, is back and in the company of a new generation of Texas oilmen and schemers.

“Falling Skies,” TNT, June 17. The alien invaders are back for season two and so are Noah Wyle and the stalwart Earthling resistance.

“The Glass House,” ABC, June 18. A houseful of people vying for a $250,000 prize are in the audience’s control. More drama: CBS has sued to stop the show, claiming it violates its “Big Brother” copyrights.

“The Soul Man,” TV Land, June 20. Cedric The Entertainer and Niecy Nash star in a sitcom about a former R&B singer who finds a new calling as a preacher.

“The Great Escape,” TNT, June 24. Three teams are put into action adventure movie situations in this reality series and must get out; cash awaits.

“The Newsroom,” HBO, June 24. After dabbling in films (such as the Oscar-winning “The Social Network”), Sorkin returns to series TV with cable news in his sights.

“Anger Management,” FX, June 28. With “Two and a Half Men” debacle behind him, Charlie Sheen is looking for laughs playing an unconventional therapist.

“Brand X with Russell Brand,” FX, June 28. The actor-comedian offers his perspective on politics, pop culture and more in a new late-night show.

“Queen & Country,” PBS, July 1. As Queen Elizabeth II marks 60 years on the throne this summer, here’s a primer on the customs and surrounding the British monarchy and a tour of sites central to royal history.

“Breaking Bad,” AMC, July 15. The drama about a teacher (Bryan Cranston) who turns to meth-making airs its fifth and final season, broken into two with eight episodes now and the rest in 2013.