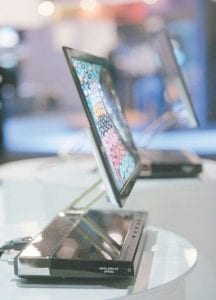 Now that flat-panel TVs have come down from thousands of dollars to as little as $200, manufacturers are pushing high-end alternatives that are slimmer, use less energy and come with other high-end addons — and can carry price tags in the thousands again. Pictured here is Sony’s 11-inch OLED digital. (AP Photo)

Lee Richman installs high-end home theater systems that can cost as much as $170,000. Lately, he’s noticed that some of his clients — or their interior designers — are perking up when they hear about ultra-slim TV sets, which come off the wall only about an inch.

The difference between these thin models and regular flat-panel TVs, which generally are about 3 or 4 inches deep, is pretty small. It’s nothing like the aesthetic shock that consumers had when flat panels were introduced to replace fat old cathode ray tube TVs.

But in a certain slice of the market — anyone who has subscribed to more than one home decor magazine, perhaps — super slim TVs make people “very enthused,” Richman said.

This is textbook business strategy for TV makers. Now that flatpanel TVs have come down from thousands of dollars to as little as $200, manufacturers are pushing high-end alternatives that are slimmer, use less energy and come with other high-end add-ons — and can carry price tags in the thousands again.

Bulky boob tubes have long been banished from the hippest living rooms, and the vast majority of TVs sold in the U.S. today are flat panels. But competition and the recession have sent prices falling, cutting into profits.

Tweaking with a basic product’s look is a classic way to re-ignite demand. Think of jeans: Designers stress a boot cut one year, narrow pant legs the next.

When it comes to TVs, screens can get only so big. So manufacturers are hoping to recoup some of their lost margins by stressing a set’s minuscule depth to consumers who still have money.

“You’re going to see them marketing the bejesus out of that, because they’ve maxed out the resolution” and other features that often are used to sell TVs, said Jim Barry, a spokesman for the Consumer Electronics Association.

Thinness is an easy marketing factor to reach for, since it’s tangible and easily measured, just like screen size. Manufacturers are also improving picture quality, but the measurements, like contrast ratio and color gamut, are more difficult for a shopper to understand.

Samsung Electronics Co. is pushing ultra-thin design as one of the enhanced features of its latest HDTV line, which starts at $1,600 for a screen 32 inches on the diagonal and costs as much as $4,000 for a 55-inch screen and other features. The company is putting a lot of effort into getting these sets in front of consumers, including by setting up mall kiosks for demonstrations, said Jonas Tanenbaum, vice president of flatpanel marketing for Samsung Electronics America.

Among the selling points: The sets are about 1.2 inches thick. They also are backlit by energy-efficient light-emitting diodes instead of the standard fluorescent tubes. The higher-end models can connect to the Internet and PCs.

Because 1-inch-thick TVs are relatively new and cost so much, it is too early to tell when superslimness will trickle down to the mass market. Paul Gagnon, an analyst with market researcher DisplaySearch, estimates that ultra thin sets make up about 2 percent of the overall TV market. In North America, it’s about 5 percent.

Toshiba Corp., for one, is not bothering with slim models, at least for now. Its latest flat-panel TV is 4 inches thick.

“We don’t believe, especially in this economy, that people are willing to pay extra for ultra-thin,” said Scott Ramirez, vice president of TV marketing at Toshiba America Consumer Products. “No one is complaining about their sets being 3 or 4 inches thick.”

Even so, the long-term trend is probably toward skinnier and skinnier sets, perhaps eventually down to less than half an inch. To get significantly thinner than that, the sets probably will need a different display technology, such as organic LEDs, or OLEDs, which generate light on the display’s surface and don’t have to be illuminated from behind. Sony Corp. has an $2,500 TV that uses OLEDs, a first for the industry, and is just 3 millimeters thick (less than oneeighth of an inch). But for now the screen is only 11 inches on the diagonal.

Gagnon expects ultra-thin models to be at a premium for another year or two, while manufacturers wring as much as possible from customers who are wealthy, or early adopters of gadgets or especially design-conscious.

Of course, after that, once ultrathin TVs become the norm, manufacturers will once again have to come up with another way to lure big spenders.