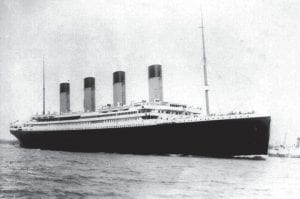 April 15, 2012 is the 100th anniversary of the sinking of the world’s biggest ocean liner S.S. Titanic, pictured above, just five days after it left Southampton, England, on its maiden voyage to New York. (AP Photo)

From dramas to docs, the Titanic centennial won’t escape TV’s notice. On special programming, viewers will be welcomed aboard the doomed luxury vessel, hear stories of its passengers and crew, and explore the legacy of its tragic end.

If you don’t feel like heading for your local movie house to see James Cameron’s “ Titanic” rereleased in 3-D splendor, you can catch a new dramatic telling of the epic saga on ABC.

This four-hour miniseries can’t claim Leonardo DiCaprio, but it does have a big name attached: Julian Fellowes, the acclaimed screenwriter of “Gosford Park,” ‘’ The Tourist” and “ Downton Abbey.” It airs over two nights, beginning at 8 p.m. on April 14 and concluding the next night at 9 p.m. to mark the 100th anniversary of Titanic’s sinking.

Linus Roache (“Law & Order”) stars as lofty first-class passanger Hugh, Earl of Manton, while his wife, Louisa, is played by Geraldine Somerville (the “Harry Potter” films). Their daughter Georgianna is played by Perdita Weeks (“The Tudors”).

Each hour follows similar events from the perspectives of different passengers and crew, building to a powerful conclusion in the final hour that draws together all the stories during Titanic’s final moments — and the final moments of many people it was carrying.

— “Titanic’s Final Mystery” (April 5 at 8 p.m. on the Smithsonian Channel on DirecTV Channel 565) re- examines two critical questions of the Titanic’s demise: Why did it hit the iceberg in the first place? And why did the ship closest to Titanic, the Californian, never come to its rescue? Author and Titanic expert Tim Maltin uncovers evidence that both ships were deceived by mirages, dooming Titanic to its fate.

— “Titanic: the Final Word with James Cameron” (April 8 at 8 p.m. EDT on National Geographic Channel) follows the Oscar-winning filmmaker and National Geographic explorerin residence as he dives back into Titanic’s mysteries. Cameron gathers some of the world’s leading Titanic experts to pore over underwater footage from Cameron’s more than 30 dives to the wreck, as well as historical records, survivor eyewitness accounts and scenes Cameron’s blockbuster hit, as well as a never-beforeseen stress model and forensic evidence. The goal: to answer questions about how the ship broke apart and why its remains are scattered.

— “Save the Titanic with Bob Ballard” (April 9 at 10 p.m. EDT on National Geographic Channel) sets the man who discovered the ship’s final resting place on a new quest: protecting Titanic’s underwater graveyard. As evidence mounts that the ship is under siege by natural forces, careless visitors and, possibly, rogue salvage attempts, Ballard mounts an effort to protect the legacy of history’s most famous ship. Ballard’s odyssey takes him to the shipyards of Northern Ireland to meet with descendants of the men who helped build Titanic, then sailed on her maiden voyage.

— “The Titanic with Len Goodman” (April 10 at 8 p.m. on KET) examines the impact of the sinking on the thousands of affected families, part of the Titanic legacy that lives on in the victims’ descendants. Len Goodman, best known as a judge on “Dancing With the Stars,” has his own connection: Before he was a dancer, he was a welder in East London for the company that built Titanic, in Belfast, Northern Ireland. Goodman takes viewers on an exploration of the ship’s 100-year legacy through the stories of the handpicked group of men who helped build Titanic and then died with it.

— “Saving the Titanic” (April 10 at 9 p.m. on KET) is a historical drama that tells of the self-sacrifice and bravery of the ship’s engineers, stokers and firemen in the face of impending death. What happened in the engine and boiler rooms after the collision? Based on eyewitness accounts, it’s the story of nine men from the engineering crew who battled to fight back the sea and keep the power running, even when they realized all was lost.

— “ Why Ships Sink” (April 18 at 9 p.m. on KET) is a “Nova” program that investigates the safety of current-day cruise ships, which keep getting bigger and bigger. Some engineers fear that these towering behemoths are dangerously unstable, and the recent tragedy of the Costa Concordia has raised new questions about their safety. “Nova” brings together marine engineering and safety experts to reconstruct the events that led to famous cruise disasters, including the ill-fated Concordia, the Sea Diamond and the Oceanos.