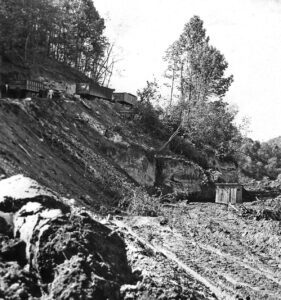 The TVA used cheap coal from early and unregulated strip mines like this one in the 1960s to fuel its power plants located elsewhere, while hurting the region’s deep-mining industry and causing environmental destruction that still lingers today. (Eagle file photo)

It is not often that journalists confess they have run out of adjectives to describe an event, but two veterans who are covering the flooding in eastern Kentucky tell me they simply don’t have a sufficient vocabulary to describe what they see all over the region. “Unprecedented” has often been used. The Mountain Eagle’s editorial last week called it “unnatural.” It can also be called “unnecessary.”

No degree in hydrology or meteorology is required to know that mountains denuded of soil and timber will cascade water and mud at a rate that nature never intended. As retired UK Appalachian historian and native West Virginian Ron Eller has said, “The old people used to call the water that washed down from the mountains ‘the tides’. That was before the strip miners came and turned mountaintops into tabletops.” No entity is more responsible for those tabletops than the Tennessee Valley Authority, an agency created in the first hundred days of Franklin Roosevelt’s New Deal to end flooding in the Tennessee Valley.

TVA’s craze for cheap coal and cheap electricity is what brought large-scale strip-mining to eastern Kentucky. Though it did not try to block its own employees from unionizing, TVA placed a priority on non-union deep-mined and strip-mined coal. As South-East Coal president Harry LaViers often stated, no deep miner committed to safety could possibly compete with strip miners who bulldoze off the tops of mountains and send the “overburden” down the sides into streams and homes. FDR had promised that TVA would be a “yardstick” to measure good utility practices. In the mountains that became a very short yardstick. TVA director David Lilienthal called the agency “democracy on the march.” It never marched in eastern Kentucky, where TVAsubsidized coal operators used the now-outlawed broad-form deed to plunder coal from the mountainsides with no compensation to the landowners.

If TVA had really been the “greatest peacetime achievement of twentieth-century America,” as proclaimed by historian Henry Steele Commager, and had it been the progressive agency so often praised by the nation’s liberals, it could have committed to safely mined, unionized, deep-mined coal. The fate of eastern Kentucky would have been far different and the worst of the recent flooding avoided.

TVA in 20 years dammed up most of the Tennessee River and its tributaries for flood control. That has always been cited as its greatest achievement, but few bother to note that it moved 125,000 people from their homes and land to create those huge dams and lakes. By the 1950s the agency was building some of the world’s largest coal-fired steam plants and searching for the cheapest coal it could find. It sent a highly skilled engineer from its Coal Procurement Division in Chattanooga to eastern Kentucky to open negotiations with strip miners to determine if they could meet the agency’s requirements for very large quantities of cheap coal. After a competition, TVA picked Richard Kelly and Bill Sturgill, owners of Kentucky Oak Mining Company, as its supplier.

Blessed with TVA’s long-term contracts, and with the close technical assistance of TVA engineers, Kelly and Sturgill began to experiment with much larger equipment. The largest coal auger ever built, with a seven-foot diameter, went into operation alongside the largest bulldozers ever seen in the mountains. By 1961 they were producing 50,000 tons of coal a week for TVA. Not even the largest U.S. Steel captive deep mines could produce that much. The five-year contract made large-scale stripmining feasible in the mountains because it provided a guaranteed market. Using the TVA contract to attract banks and equipment leasing firms, Kentucky Oak expanded quickly from its initial mines in Knott and Perry counties. What Kelly and Sturgill could not produce themselves, they subcontracted to other firms, spreading strip-mining across the coalfields. Giant L&N unit trains soon headed out of mountain hollows, bound for TVA’s steam plants.

It was against these coal operators that the Appalachian Group to Save the Land and People organized in the 1960s. Whitesburg attorney Harry Caudill took an early lawsuit, filed on behalf of the Ritchie family in Knott County, to the Kentucky Supreme Court, seeking to invalidate the broad-form deed. The court ruled against him. Widow Combs lay down in front of bulldozers to stop the stripping on her land. Uncle Dan Gibson, an Old Regular Baptist preacher, used his rifle to halt stripping on the land of his nephew, who was serving in Vietnam. They and others, like Joe Begley of the Citizens’ League to Protect Surface Rights in Blackey and the Save Our Cumberland Mountains group in East Tennessee, became celebrity witnesses at legislative hearings that eventually led to the passage of tougher federal regulations in 1977.

TVA claimed that it imposed its own regulations on strip mines. Its director of reclamation, James Curry, who once described stripmining as “part of the American Way,” insisted that its regulations protected landowners. In fact, the agency’s regulations were even weaker than Kentucky’s. But TVA went further than even some coal lobbyists in opposing strip-mining’s critics. TVA director Frank Smith, a celebrated liberal for his civil rights stands, called strip mine critics “reactionaries.” Board Chairman Aubrey Wagner went further still as Congressman Ken Hechler of West Virginia championed federal legislation. Testifying before the Tennessee legislature in 1971, Wagner said of “shortsighted” strip mine critics:

“They would outlaw strip-mining even in the face of the fact that such action would create a power shortage in which industrial activity would be severely curtailed, unemployment would increase, commerce would stagnate, and the home life would be disrupted. Their solution, would, in my judgment, create problems of more disastrous consequences than the problems they seek to cure.”

In a report filed with the government in 1977 as President Jimmy Carter prepared to sign the federal legislation, TVA stated: “There are virtually no long-term adverse effects from surface mining conducted in accordance with TVA’s reclamation policies, excepting the consumption of coal itself and some possible visual effects.” In the same report it made no apologies to the victims of the broad-form deed, deeming it “not an environmental problem.”

The mountains have reaped a very bitter harvest from the practices of an agency created to aid people of the mountains and valleys of its region. TVA’s policies made the recent flooding worse. Decades ago it prevented what would have been a much brighter future of safely mined coal from deep mines. TVA owes reparations to the people of eastern Kentucky. It has offered them a “yardstick” of far less than 36 inches — and a legacy of unprecedented flooding that was indeed unnecessary.