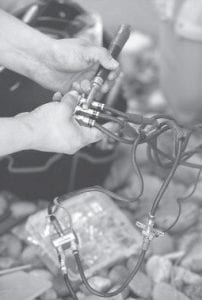 A Comcast Cable technician changed cable connections recently during a digital upgrade at a customer’s home in San Rafael, Calif. TV’s big switch from analog to digital broadcasts is coming up in less than one year, on Feb. 17, 2009. (AP Photo/ Darryl Bush)

TV’s big switch from analog to digital broadcasts will be complete in less than one year, on Feb. 17, 2009, and many consumers are puzzling over how the shift will affect them: Do they need a new converter box, a new TV, a better antenna?

But it’s pretty clear which business interests stand to gain.

Cable and satellite TV companies could see a wave of new subscribers as people with older TVs pass on hooking up converter boxes to older televisions or buying new sets. Local stations are already using some of the extra capacity digital broadcasting frees up by launching auxiliary TV channels with weather and traffic reports, and they’re looking for ways to bring programming to portable devices.

The Federal Communications Commission began the switch many years ago to free up a large chunk of U.S. airwaves, which the government is in the process of auctioning off, a process that will net billions of dollars for public coffers. Making all UHF broadcast spectrum above channel 52 available will allow for powerful new wireless services, and possibly for a new network for public safety officials to use during disasters.

Most U.S. TV stations already broadcast digital signals as well as analog. What’s happening a year from this past Sunday is they’ll switch off the analog signals. No one with cable or satellite service will be affected, nor will anyone who gets stations over the air with a newer TV with a digital tuner.

Those who will be affected are the 13 million or so households that get TV broadcasts exclusively over the air and have a TV more than a few years old – or even a newer TV that’s relatively small. Also affected are TVs not connected to cable, even if a home has cable.

A Nielsen Co. study released Feb. 15 found that 16.8 percent of all U.S. households have at least one analog television set that would not work following the switch. And Hispanics are nearly twice as likely as whites to be without TV reception.

Affected households can get a digital converter box, buy a new television or sign up for cable or satellite service or one of the newer cable-like services being offered by phone companies.

Most TVs being sold today have digital tuners, which are sometimes called ATSC tuners, after the technical standard used to make them (the analog standard was known as NTSC). If your current TV is less than a year old, the initials “DTV” appear somewhere on its front, or its screen is rectangular, you’re probably OK. If you still have the owner’s manual, check there whether the tuner is digital.

The new signal could mean the picture on some televisions will improve, but it doesn’t guarantee high-definition visuals. That depends on whether a particular TV is set up to receive high-definition programming and whether a program is broadcast that way.

The switch could give an economic boost to retailers and manufacturers, who would benefit from selling the boxes and new TVs. And cable providers could get a boost over the next year or two from consumers who sign up for new service rather than deal with the other options.

According to a report Sanford C. Bernstein & Co. released Feb. 15, an estimated 1.4 million households will likely switch to pay TV service as a result of the digital TV transition – enough to significantly lift the growth rates for the cable industry in 2009, compared to recent years.

So far he hasn’t seen any abusive behavior, but he said: “We want the folks in the marketplace to know that we’re watching.”

Brian Dietz, a spokesman for the National Cable & Telecommunications Association, a cable TV industry group, notes that cable’s educational ads about the transition don’t say consumers have to switch to cable.

For retailers, Bernstein analysts say the economic boost is likely to be incremental. The market for the converter boxes is likely to be about $1.4 billion, and for new TVs about $1.7 billion, for a total of $3.1 billion – still a relatively tiny part of the $150 billion U.S. consumer electronics market.

The cost to broadcasters of new digital equipment is relatively small. Tim Thorsteinson, president of the broadcast division of Harris Corp., a major manufacturer of broadcasting equipment, says it costs about $500,000 to upgrade a typical TV station.

The transition comes at a tough point for local TV stations, however, because they are seeing live viewership erode amid a proliferation of ways to watch video – over the Internet, on iPods and DVDs.

Aitken calls using HDTV broadcasts the “low-hanging fruit” for TV stations to take advantage of. He points to another big possibility: sending live TV broadcasts to portable devices like cell phones. Adapting the handsets would be simple technically; the far bigger issue is getting broadcasters, programmers, mobile device makers to agree on a standard.

This week, a preliminary field trial for three competing technologies for portable TV viewing was getting under way in San Francisco, Aitken said. The industry could have a candidate for the a new mobile TV standard in place by the third or fourth quarter of this year.