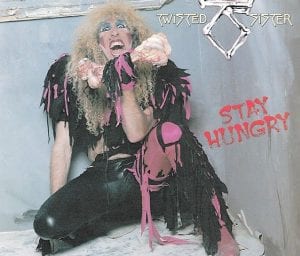 The latest by Twisted Sister, “Stay Hungry,” is shown in this photo released by Rhino records.

This is the third time that this album, Twisted Sister’s most successful, is being released, so the real attraction is a second full disc of demos and unreleased tracks that have been gathering dust at guitarist Jay Jay French’s apartment since Ronald Reagan was president.

It kicks off with “Death From Above,” which takes “Powerage”- era AC/DC chords and blends them with lyrics similar to Twisted’s “Destroyer,” about an angry demonic force. “Death Run” sounds like an early version of “Stay Hungry,” and “We’re Coming On” wisely leaves out the second half of the title on the album cover.

Then there’s a hidden track in which Dee Snider sings “Lollipop Guild” from “The Wizard of Oz” through a vocal processor to make him sound like a Munchkin, which itself is worth the price of the album.

CHECK THIS TRACK OUT: “30” is a new single written by Snider during his appearance on a reality TV series last year. It’s about how band members, when Twisted Sister was at its apex in the ’80s, couldn’t fathom turning 30. Now, as they note, “30 came and went a long time ago.”