Dee Snider among those competing in CMT's 'Gone Country' 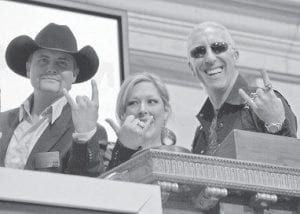 Dee Snider, the tough-talking frontman for the metal band Twisted Sister, probably didn’t endear himself to country fans when he proclaimed over a spread of fried chicken and biscuits that he doesn’t like country music on the new Country Music Television reality show “Gone Country.”

But that was before Snider, one of six contestants on the show vying for a record deal, saw Gretchen Wilson plug her guitar into a stack of Marshall amplifiers and rock out.

The weekly show premiered last Friday (Jan. 25) at 8 p.m. on CMT and continues through March 7.

Host John Rich, half of the country duo Big & Rich and an in-demand songwriter and producer, will choose the winner and produce a single for them.

Rich pairs each contestant with some of Nashville’s finest writers to help them craft an original tune that they’ll perform on the final episode.

The series was taped over 10 days in October at country star Barbara Mandrell’s former home, a timber-and-glass mansion Brown calls “the biggest log cabin in the world.”

The premiere showed the contestants hopping onto Rich’s tour bus and heading out to the estate, where they rode ATVs, fired shotguns and cleaned horse stalls for a crash course in “country living.”

Snider and Brown came across as the bad boys, with Snider dropping the “I don’t like country music” bomb over supper with Rich.

“I looked at him like ‘Are you an idiot. What are you doing here then?”‘ Rich recalled. “He had a real antiquated idea of what country music is about.”

By the end of the two weeks, after hanging out with Rich and Wilson, Snider became a country convert – sort of.

“My opinions about country music were made around the same time I said ‘I don’t like asparagus.’ I was 7 years old,” he said. “But I have discovered a form of country music that I love, and that’s the hell-raising Hank Williams Jr. brand.

“I really did go from having a disdain for it to liking it, but not all of it, just certain kinds,” added the tattooed singer who’s perhaps best known for the ’80s headbanger anthem “We’re Not Gonna Take It.”

The other contestants came in with more of an open mind, but that didn’t necessarily guarantee them more success. As Rich put it, if you took a group of country singers and asked them to sing R&B, perhaps one in the bunch could do it well.

Where the “Gone Country” contestants shined, he said, was in their songwriting.

“Every artist wrote an incredibly good song, which really shocked me,” Rich said. “It was incredible to see someone like Sisqo’, a straight up R&B and hip-hop guy, come into Nashville and really dive into the process.”

To pick a winner, Rich looked for the quality of the song and of the performance. But also for things like how the crowd reacted, how they handled themselves and how well they understood the genre and its fans.

He wanted someone who had, indeed, gone country.