Two being held on drug charges in Florida jail 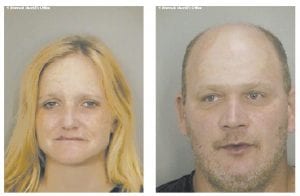 Marsha D. Breeding, left, and John Pugh are seen in photographs released by the Broward County, Fla., Sheriff ’s Department. The two have been held in a Florida jail for nearly a month on charges of illegally possessing prescription drugs.

An eastern Kentucky man and woman remained jailed in south Florida on Tuesday, 27 days after police found the man passed out in a car parked near a suite of doctors’ offices in Deerfield Beach.

John Pugh, 43, of Letcher County and Hazard, was found passed out in the front passenger seat of a red, 1997 Pontiac car with the door open and his legs hanging outside of the vehicle around 4 p.m. on July 8, according to Mike Jachles, with the media relations department of the Broward County Sheriff ’s Department. The car was found parked at 426 West Hillsboro Blvd., Deerfield Beach, which is close to a pain treatment center.

Marsha D. Breeding, 34, was found in the backseat of the vehicle. It is unclear if she was passed out when police approached the vehicle. Jachles said no one was sitting in the driver’s seat.

Jachles said after Pugh and Breeding were detained they refused to answer questions about the pills. Jachles did not know the amount of pain pills that were found to be in the possession of Pugh and Breeding.

Court records show that Pugh’s address was formerly listed as 112 Midland Drive, Isom. In 2005, Appalachian Regional Hospital filed suit against him for debt collection, according to court documents. In 2002, Pugh was charged with theft by failure to make required deposition of property.

On June 11, a warrant was issued in Letcher County against Breeding, whose address is listed as 1201 North Main Street, Hazard, for violating conditions of her probation in connection with a flagrant nonsupport charge.

Thousands of Kentuckians are believed to be traveling to Broward County each month to obtain prescription drugs from the large number of storefront pain clinics which are now in business there.

The Miami Herald
reported earlier this year that some doctors in Broward charge a few hundred dollars for an MRI that justifies a prescription for as many as 300 pain pills and anti-anxiety pills, often without the patient ever having to go to a pharmacy.

The Herald
reported that drug dealers are making thousands of dollars for each trip to Florida, as a single 30 milligram oxycodone pill may sell for $30 on the street in Kentucky.

Beginning December 1 this year, pharmacies in Florida will begin using an electronic database to track prescriptions for narcotics that is similar to the KASPER system now in use in Kentucky and several other states.